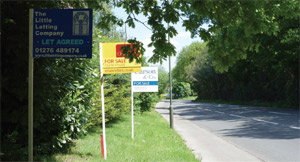 These boards on the verge outside the properties were removed by the council.”

The part of this legislation that describes the conditions and limitations applying to agents’ boards is Schedule 3, Part 1, Class 3A. The law on advertisements is complex but it does permit the display of some adverts on the property, subject to certain conditions and restrictions, for the period when it is for sale or to let, without the need to obtain planning consent.

Compliance with these Regulations is important; anyone who displays an agent’s board, or knowingly permits someone else to do so, without complying with the requirements necessary to obtain deemed consent is acting illegally. It is then immediately open to the planning authority to bring a prosecution in the Magistrates Court for an offence under section 224 of the Town and Country Planning Act 1990.

In recent months a number of repeated concerns have been brought to my attention. I am aware that some Councils, aware of these issues, are considering the possibility of applying for a Regulation 7 directive, which would mean that deemed consent would not apply and agency boards would need specific consent before being erected. One recent example is Newcastle City Council, who have obtained such a directive for several different areas of the city.

Whilst, as Ombudsman, I have no regulatory powers to take action in individual cases (I may only make a specific direction on a case brought to my office by a consumer where they are directly affected by the actions of the agent), I will highlight the concerns to the agent responsible and ask that they remedy the matter. The issues that are regularly highlighted to me, all of which are matters that may cause considerable annoyance, include the following:

A recent concern was highlighted to me by a County Councillor who wanted my views on agents placing advertising boards on school properties, under the guise of being a “Proud Sponsor”, and whether this was in the ethos of the TPO Scheme.

In that case the head teacher had approved the erection of the board. As I have no regulatory powers I was unable, and did not wish, to intervene. However, I spoke to several industry members about the matter, being aware that many agents do support community events and inevitably their boards will appear at such events.

Whilst the obligations contained within the TPO Code relate to the advertising of specific properties rather than charitable or local events, and I am making no comment on the legal position, my view is that such support for the local community should be a good thing rather than a matter of angst. Obviously there is a case for reasonableness when considering the number and locations of the advertising boards.

My message has been that consumers will assume that the erection of the board at a property in conjunction with a sale or let will be a straightforward matter, which will be attended to promptly. All agents should take steps to ensure that this is indeed the case.

I now go further and advise that, in addition, when erecting a board that seeks to advertise the agent, through their sponsorship of a community event, reasonable considerations be taken into account in order not to aggravate the members of the local community. 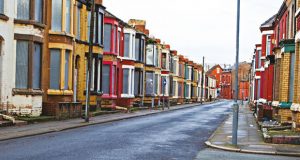 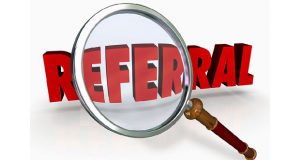