It’s the quiet revolution in housing choice. Susanna Caulfield, senior associate at Rosling King LLP and Khadijeh Moghaddam, trainee solicitor at Rosling King LLP, provide a legal reflection on the rise of co-living and the potential pitfalls for developers and planners. 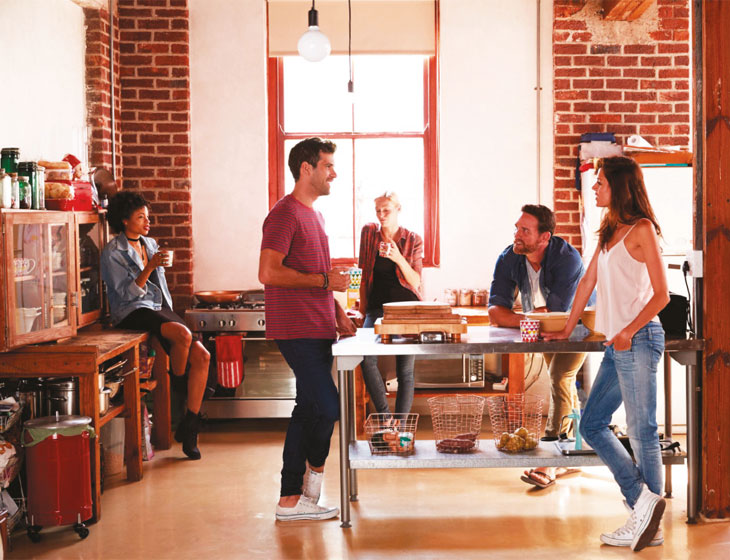 The rise of co-living spaces is becoming a revolutionary development in the rental markets. Described as a semi-dwelling, semi-hotel, semi-office and semi-community centre, co-living (and working) offers a number of perks without the drawbacks of renting. But where does it fit in with regard to the legal landscape and is the current system fit for purpose as this form of living continues to increase?

Aimed at young urban professionals, co-living addresses the need for a sense of belonging and community that many young professionals crave for, but it is not only urban professionals that appreciate the living arrangements, the older generation also find solace in living collectively, as do those individuals working in a new city, where the community element ensures easy access to a network of contemporaries that might otherwise take a long time to cultivate. With the immense success of co-working spaces globally over the past few years, multinational corporations including property investors and developers are now being lured into co-living, recognising the many advantages it offers young professionals.

Aimed at young urban professionals, co-living addresses the need for a sense of belonging and community that many young professionals crave, but the older generation also find solace in collective living, as do individuals working in a new city.

Co-living provides opportunities to make friends outside work, share cultural experiences, learn how to live with people from diverse backgrounds and seek out experiences. Ultimately, co-living leads to a birth of a community of like-minded individuals. It is a social movement based upon a sense of community and collaboration.

Born in China and the USA

The scheme began in 2012 in China and the USA with You+ and Ollie, respectively. Three years later a competing company, the Common was set up in the US. Between them Ollie and Common have co-living sites in nine cities across the US. The UK entered the co-living market in 2016 with the emergence of The Collective in West London, which has been expanding since then to Central and East London.

Unsurprisingly, this innovative form of living poses a challenge the current legal framework, which is more suited towards student accommodation schemes and houses in multiple occupation. It is worth closely examining the legal considerations and challenges facing developers and operators in the co-living sector and endeavour to understand how this revolution could change the property landscape in the future.

Shortcomings in the legal landscape

The introduction of co-living has exposed shortcomings in the legal landscape governing planning which are coming to the fore and there is much talk about reform. The Town and Country (Use Classes) Order of 1987 no longer appears to be fit for purpose. The Use Classes are becoming increasingly harder to ascertain in the case of co-living. At the heart of this challenge is determining where co-living fits within the current Use Class framework. It is a semi-dwelling, semi-hotel, semi-office and semi-community centre. The length of stay, the extent the units are self-contained, and the level of privacy or exclusive possession enjoyed are all factors to be considered in any future development/reform proposal.

For example, Planning Permission for The Collective’s first site involved different Use Classes for different parts of the development. The Collective’s upcoming Stratford site meanwhile has proposed a sui-generis use, i.e. its use as a shared living accommodation does not fall within any specific Use Class. The Collective explained the proposed shared living accommodation differed from “conventional permanent dwellings (Use Class C3) by virtue of layout, management and function”. As a result of such developments, the Draft New London Plan has catered for “Large-scale purpose-built shared living” as a sui-generis use development.

Another planning consideration that arises with such developments is the requirement for Affordable Housing. Developers may not want to cater for affordable housing on-site on the basis that affordable housing does not fit in with the ethos of shared living. Some Co-Living operators have addressed this issue by making provision for an off-site affordable housing contribution with a review mechanism to re-assess any additional contribution that could be made over the agreed parameters, depending on future viability.

Another source of uncertainty is the relationship between the individual and the “landlord”. One has to consider whether an assured shorthold tenancy (AST) agreement or a more bespoke permit or licence agreement will be applicable, with the former being the standard form governing tenant/landlord relationships and the latter a permit similar to hotel occupancy. Somewhere in between an AST and a permit agreement may be more fitting, where protection and flexibility for both parties are catered for.

Similar debates took place in the past with the emergence of AirBnB, where questions arose around how such short-term holiday lets would fit in with the current housing regime. It’s a question that has still not been fully resolved.

With most rental agreements typically for fixed periods of 12 to 24 months and with young professionals moving jobs and homes frequently, the usual arrangements do not make sense anymore. Co-living solves this issue as well as the hassle of constantly moving furniture and utility contracts. Individuals in The Collective’s Old Oak site can try residency for a month before they commit to 9 or 12-month contracts and the new Canary Wharf site has introduced short-lets where you can book one night stays in a studio.

Questions also arise as to whether the usual Gas Safety checks and EPCs that are required when letting out a property would apply in such circumstances. It appears for now they do not but we will have to wait and see what the future holds in this regard.

The Tenant Fees Bill has recently come into force setting out specifically those payments which are acceptable for a landlord to charge their client. Any payment that does not fall within the permitted definition is prohibited – upfront costs aimed at covering costs of referencing, credit checks, inventories, payments for cleaning are all banned. As a result, a landlord must tread carefully to avoid running foul of the new law. The question then arises of how the landlord will recover their costs, if they can at all and whether such changes will affect the arrangement and operation of co-living.

There are currently consultations taking place in relation to scrapping the Section 21 Housing Act 1998 Notice, whereby the landlord cannot serve notice on a tenant following expiry of their fixed term. Undoubtedly, many landlords will be uneasy with such a change, but it would be interesting to see how such a change will affect the co-living sector, if at all.

One of the biggest headaches for a landlord is having a tenant in arrears. That headache can easily turn into a migraine if you add ongoing questions of whether the Housing Act 1998 applies to the co-living tenant. Can a landlord rely upon the Housing Act 1998 to serve notice on a tenant in arrears, especially if that tenant is a licensee under a permit agreement? Probably not. But with co-living slowly gaining ground this may be an area to look out for. In the meantime, landlords should take measures to prevent as far as possible such an occurrence. The use of rigorous reference and financial checks may keep the pain at bay until a more viable long-term solution is found.

The future is bright for co-living

With property prices being high and deposit expectations being unrealistic, it is no wonder individuals look to renting but renting itself has its own real challenges – apartments are getting smaller and rents higher, commercial contracts tend to be inflexible and landlords absent. Co-living plugs the gap by making communal living a very cost effective, convenient and flexible solution. Living collectively is more about the social experiences rather than the personal space.

It is not the size of the compact, fully furnished bedrooms that sell co-living but the social activities and communal areas. It is no surprise then that the trend for co-living is not restricted to London with the USA, Germany, China and Singapore also experimenting with the concept. So far, the experiment is working well but there are hurdles to overcome before any developer can jump on the co-living bandwagon. The cost of bare land is not only high but scarce, suitable sites are hard to come by and unsupportive public policies are not helpful. Despite this however, there is strong appetite for co-living and with time and dedication the experiment may prove fruitful and long lasting.

Susanna Caulfield is a senior associate in the Real Estate Group at Rosling King LLP. Her experience involves acting for developers in the acquisition and disposal of development land, in both the commercial and residential sectors. She has expertise acting at every stage of the development process to include the initial acquisition of sites, the work out and funding involved, and the final disposal of developed units or residential plots.

Khadijeh Moghaddam is a trainee solicitor in the Real Estate Group at Rosling King LLP due to qualify in September 2019. Her experience involves acting for developers in the acquisition and disposal of development land.