As Purplebricks case studies that prompted comments appear to remain on the company's website.

The National Trading Standards Estate Agency Team (NTSEAT) has waded into the debate about the ‘fees saved’ advertising claims made by many online-only estate agents.

NTSEAT says it wants to remind online agents not to make unsubstantiated and inaccurate claims about their selling fees when compared to traditional high street agents.

The warning comes after last week’s ruling by the Advertising Standards Authority (ASA), in which it upheld a complaint about Purplebricks’ website.

This was prompted by a complaint from a West Sussex agent about nine ‘fees saved’ client case studies featured on the Purplebricks website in which, Arun Estates highlighted, did not accurately reflect the different service levels offered by traditional and online agents.

“These businesses should ensure that they are making comparisons against like-for-like services,” says James Munro, Head of the NTSEAT (pictured, left).

“It is wrong to make general claims about savings when the headline price does not include facilities such as a sales board, floor plans, photographs, accompanied viewings, sales progression or other facilities which are normally included with traditional high street firms.

“We recognise that online-only agents have a role in the marketplace for customers who wish to do more of the work themselves but they need to remember that they are subject to the same legal requirements as any other estate agency business.

“Firms advertising estate agency services for a fixed fee of a couple of hundred pounds or less need to consider whether they are little more than portal listing services and should therefore be very careful when making comparative claims in their advertising.

“They also need to make clear the difference between an upfront non-refundable fee and a commission which is payable on completion.”

And in a bizarre twist to the story, Purplebricks appears not to have taken down the case studies complained about (see below), as several of the original ads featured in the judgement remain on its website, but with higher ‘fees saved’ claims and different ‘% of asking price’ figures.

For example, ‘Mrs Roach’ was specifically mentioned within the ASA judgement but the case study remains on its website, although this time the ‘fees saved’ has risen by £90 from £3,702 to £3,792.

And Mr Penfield’s case study, which was also mentioned in the judgement, has become Mr Penfold.

The ASA requested in its judgement that Purplebricks does not repeat the ads in the form complained about, and to ensure that “ads which made comparisons provided sufficient information about the services being compared to ensure that consumers would not be misled about either the advertised service or the competing service”. 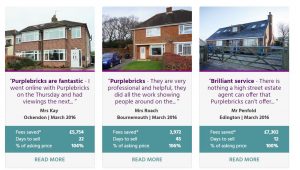