The growing gulf between supply and demand makes the UK a major property hotspot. 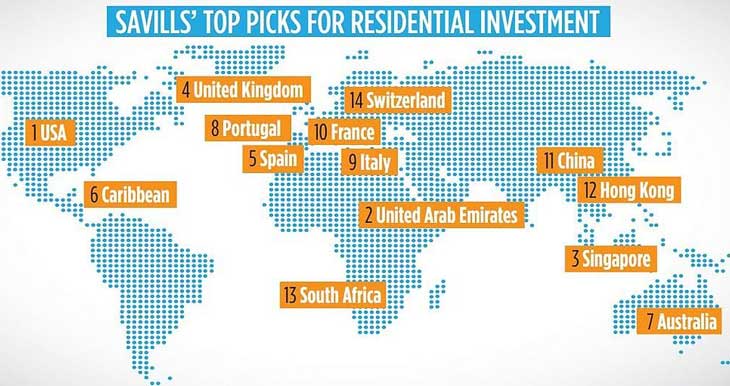 The UK is the fourth best place in the world to invest in residential property, owed largely to a general housing shortage and the country’s economic growth, according to research by Savills.

The results from the study, based on economic performance and growth prospects alongside population growth, found that the UK housing market, which has seen prices soar on average by 20 per cent since 2010, was ranked behind only the US, United Arab Emirates and Singapore as the best place to make a return on rents and increasing property values.

A separate residential market report from the Royal Institution of Chartered Surveyors (RICS) also says that the growing gulf between supply and demand is driving residential property prices higher and the organisation now predicts that house prices are set to rise by 6 per cent in 2015.

The RICS price indicator reached a 15-month high in August, with a net balance of 53 per cent more respondents reporting price increases, with growth being recorded across all parts of the UK.

“Given current market conditions, the latest data unsurprisingly shows house prices continuing to rise, and at an accelerating pace. As such, house price inflation has now quickened in each of the last seven months following a sustained period of easing towards the latter half of 2014,” said Simon Rubinsohn (right), RICS chief economist.

“This trend looks like it will continue into next year, however uncomfortable that may be for those looking to enter the market; so many of our members are telling us that they are struggling to replace the stock they have sold,” he added.