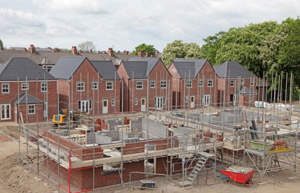 The number of new homes registered to be built in the UK increased by 7 per cent year-on-year in 2015, hitting an eight year high of over 156,000, the latest figures from the National House Building Council (NHBC) show.

“2015 was a year for continued housing growth in the UK. Both the public and private sectors have performed well and we have seen encouraging levels of house building across most regions of the country,” said NHBC chief executive Mike Quinton (left).

NHBC’s latest figured also revealed that most parts of the UK experienced significant growth year-on-year, led by Northern Ireland, up 30 per cent, albeit, from a relatively low base. This was followed by the East of England which saw a 23 per cent upturn, the North West up 16 per cent and Scotland up by 15 per cent.

London continued to lead the way in the number of new home registrations, but the 2015 figure of 25,994 registrations actually represented a 9 per cent fall on the 28,518 new homes recorded in 2014. New home registration in Yorkshire and the Humber and Wales fell by 13 per cent and two per cent year-on-year respectively.

“There is still a way to go before we are building the levels of new homes that were seen before the economic downturn, but 2015 represents consolidation on the growth seen over the last three years,” Quinton added.

One of the biggest constraints on the housebuilding industry’s ability to meet the new level of demand and deliver further sustained increases in build rates is the planning process, with many developers still finding many of their applications for consent shrouded in red tape and delays.

“How quickly we get more sites to the point where we can actually start to lay bricks will be a major influence on future house building levels,” said Stewart Baseley, Executive Chairman of the HBF.

Another major problem facing the housebuilding sector as a whole is a shortage of labour, which is pushing up the price of hiring tradesmen.

The financial crash of 2007-08 bears some of the blame as it led to thousands of people leaving the construction industry. Now that demand has returned, there is a skills shortage, with bricklayers,

carpenters and joiners in short supply.

Brian Berry (right), Chief Executive of the FMB, said, “We’re already seeing housing developments starting to stall because the cost of hiring skilled tradespeople is threatening to make some sites simply unviable. Unless we see a massive uplift in apprenticeship training in our industry, there won’t be enough pairs of hands to deliver more housing on this scale.”