Sign in or Sign up
The essential site for residential agents
Home » News » Marketing » Up Periscope!
previous next
Products & Services

The event was broadcast live from St Neots in Cambridgeshire and attracted 54 viewers at the time – a further 10 people watched a replay. 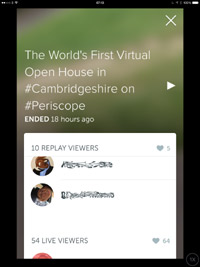 “We had 5 people turn up for the traditional version and over 10 times as many viewed live on line via the Periscope app! We were genuinely surprised not only by the number of virtual viewers, but the level of interaction and questions about the property.”

Earlier in the day, Thomas Morris had conducted a live broadcast from a local food and drink festival which attracted over 60 live viewers, “I really do think that this Periscope app has a massive future in our business,” continued Simon. “Not just to promote property, but by showing support for our local communities, giving them a voice and an opportunity to publicise their services, products or good causes, all at no charge, we are able to demonstrate real integration with the local area. This is where the future of estate agency is – the very latest technology allowing us to connect directly with local people.”

Periscope is one of the fastest growing social media platforms in the world and was recently acquired by Twitter for a reported $100 million. It allows users to broadcast a live stream around the world. Followers can interact with the broadcaster by typing in questions and can show their approval by sending a ‘heart’ – the equivalent of a ‘like’ or ‘favourite’ on Facebook or Twitter.

Thomas Morris plans to hold further Virtual Open Houses as well as broadcasting local events and providing behind the scenes information with live feeds directly to their followers and beyond.