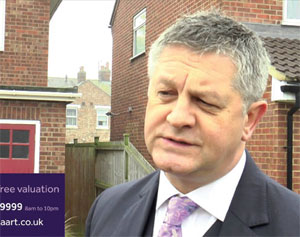 The UK Government’s ‘War on Landlords’ has caused buy-tolet sales to collapse, down by 64 per cent in twelve months.

Paul Smith (pictured), CEO of haart, calls for the Government to end the ‘War on Landlords’, saying, “The scale of decline in buy-to-let in 12 months is deeply worrying – landlords have clearly pulled out of the market and are unlikely to return any time soon. This is entirely the result of government policy, with Theresa May now picking up George Osborne’s baton and bashing landlords with renewed vigour. The end of tax relief on mortgages, the three per cent stamp duty surcharge, strict new lending with a buy-to-let market crippled by tax hikes and unnecessary regulation.

“The Government is putting landlords on the block for a property market that isn’t working. Rather than chasing investors out of the market, a better solution would be to channel their cash into house building and increasing the supply of rental properties. The Government is casting landlords as the pantomime villains of the market, but we need a serious approach and recognition of the contribution that landlords make.”