Sign in or Sign up
The essential site for residential agents
Home » News » Agencies & People » What’s it like to be a Purplebricks ‘property expert’?
previous next
Agencies & People

What’s it like to be a Purplebricks ‘property expert’? 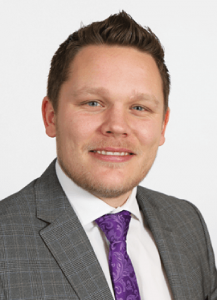 What did you do before joining Purplebricks?

I have been an estate agent since leaving school; I always wanted to be one and knew which path I wanted to follow since I was young and the only thing that held me back after leaving school was not having a driving a licence.

As soon as I passed my driving test I got a junior negotiator role in a Basingstoke agency – it’s where I live – and then at 23 I became a branch manager of a leading independent in the town, and then two and half years ago I met Kenny Bruce (co-founder and sales director of Purplebricks). The main reason for my move from the high street to Purplebricks was that I had noticed the way in which people were transacting with the high street. I’d seen a shift in the way people were contacting agents more online instead of coming into branches. So for me, it was all being a part of that change.

What do you estate agent mates think of you joining Purplebricks?

It’s a mixed bag. When I joined a lot of them thought I was crazy, but now it’s more intrigue and a lot more people are asking questions – you know, like, what’s it all about, how do we get involved, what’s it like and so on. I’m meeting with a friend of mine this evening who’s an estate agent to have a chat about Purplebricks.

Do you earn as much as you used to?

From my own personal perspective, my income during year one was comparable to the one I earned as a branch manager on the high street, and in year two I am in a better financial position than I was on the high street. The reality is there’s far greater earning potential within this business.

How’s it different from your old job?

The biggest difference is that you’re no longer working in an office and instead work on your own. I didn’t find that particularly difficult because when I was on the high street I worked for a small independent and the owner didn’t get involved much, so it wasn’t like a corporate where you’re being micro-managed and working in a big team. I like working for Purplebricks because it’s a much better work/life balance.

Can you pick and choose when you work?

I choose to work weekends because that’s when most of my customers are available, but that means that I take time off during the week to compensate for that. And overall it’s much more flexible than the 8am to 7pm, Monday to Saturday you get on the high street.

What do your customers think? Do they realise the difference between Purplebricks and the high street?

I think there’s still an element of education on our part to be done and that’s something we’re doing day by day, and via our marketing too. But I think because we’re half way between a high street and an online-only agent, we offer best of both worlds and people are starting to embrace that. And our customers seem to love us – we have very high review ratings with sites like TrustPilot.

I’ve been going for two and a half years now and for the past year, according to the Rightmove statistics, across my postcodes by sales achieved we are one of the top two agents. And day by day we’re seeing a bigger gap open up between us and our main competitors.

Are you employed or under a more flexible arrangement?

I’m self-employed like all the Purplebricks Local Property Experts but I can’t tell you the details because it’s a bit commercially sensitive. My personal opinion though when I started was, if things played out the way I wanted them to at Purplebricks then my work status was irrelevant. And I thought that, if all else failed, I could always go back to the high street should I need to. Purplebricks is a completely new and different approach to estate agency and being self-employed is part of that – it’s a mix of personal service and technology which allows me to work much more efficiently.