The young entrepreneur, who caught the attention of The Neg last year when he opened his third Winkworth office in just three years, is opening a fourth.

Winkworth, continues its expansion plans in the East of England with the opening of a new office in Eaton in the suburbs of Norwich – the fourth Winkworth office in East Anglia in four years for franchisee Jamie Moore.

The young entrepreneur caught the attention of The Neg last year when the 31-year-old opened his third office in just three years. Read the interview here. Now, with his business partner, Kylee Cates (pictured) he’s added another.

The new office is in a prominent position opposite Waitrose in Eaton, a leafy, residential area, which lies to the south-west of the city centre on the A11, the main road from London to Cambridge. The launch of Eaton follows the opening of the Hellesdon office last year, Poringland, five miles south of Norwich, in 2018 and Southwold on the Suffolk coast in 2019.

Winkworth Eaton will cover the majority of Norwich, including Newmarket Road, the most sought-after road in Norwich, the renowned Golden Triangle and the highly desirable locations of Cringleford and Eaton. 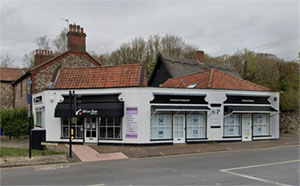 Site of the new Winkworth Eaton branch, formerly a hairdressers

Jamie and Kylee have taken over a former hairdressers shop to start the new business. They have promoted George Dix and Billy Bradford to run the Eaton office, moving from the Poringland office and both are looking forward to their new roles.

Kylee said, “Eaton and the surrounding suburbs are extremely sought after and are growing at a fast pace. We are definitely seeing an exodus from London and elsewhere and a big demand from people who are now working from home and looking for more space. We also see a good market emerging from the new developments being built around the area, not only from a new homes perspective but when buyers decide to move on.”

Jamie added, “Eaton is the perfect fit for our other two offices in Norwich and a big boost for the Winkworth brand in the city.”

Dominic Agace, Chief Executive, Winkworth, with more than 100 franchised offices nationwide, including 60 in London, said, “Jamie Moore and Kylee are shining examples of how ambitious franchisees can build a highly successful business and see future expansion in an area they know exceptionally well. Winkworth is looking further growth in key locations nationwide and we are keen to talk to property professionals with an entrepreneurial spirit who would like to start their own businesses.”