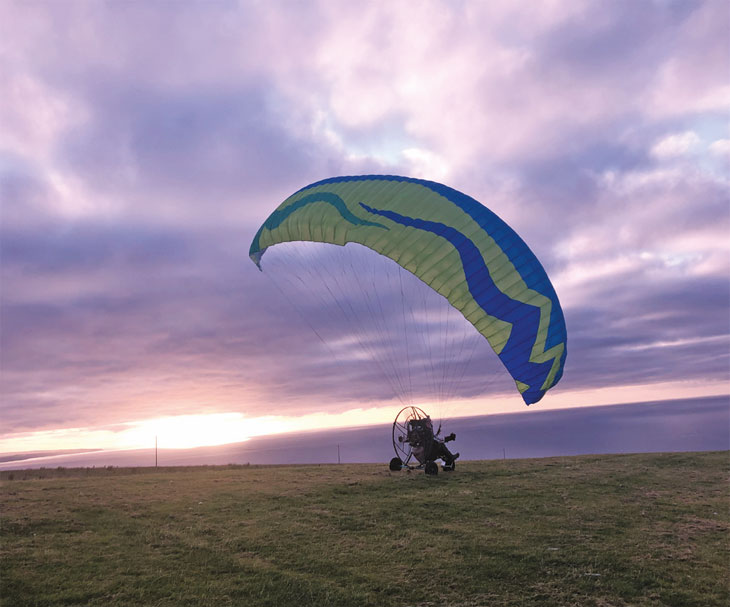 An epic airborne journey from one end of the country to the other, using just a lawnmower motor and a parachute, has landed the estate agent adventurer James DuPavey in the record books.

Guinness World Records formally certified James’ 870 mile charity flight from John O’Groats to Land’s End as a record breaker. Using a paraglider powered by a lawnmower engine, James completed the journey in 36 hours, half the time of the former record.

James, of James Du Pavey Independent Estate Agents who is dubbed ‘the Flying Estate Agent’, describes his paramotor as ‘a parachute powered by a large fan’.

The new world-record breaking flight began in John O’Groats at 3.30am on July 8th and ended 36 hours later in Land’s End.

“I am so chuffed that Guinness confirmed the record,” said James. ‘It was an incredible challenge for a fantastic cause and I am so proud.’

The flight was in aid of The Donna Louise Hospice for Children & Young People in Stoke-On- Trent. James has raised £12,000 for the charity, to provide support for children and young people with life-limiting conditions and their families. Nathan Walton, Director of Income Generation said, “James and his team have been supporting The Donna Louise since 2017, raising £35,000 through various initiatives and challenges.