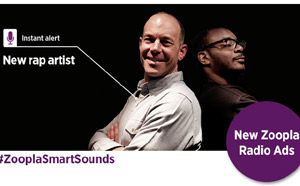 The new adverts will air across 40 radio stations nationally, including Capital FM and Heart FM, with a view to building on the success of the existing ‘Smart’ radio campaign, as well as Zoopla Property Group’s (ZPG) national print and outdoor advertising campaign.

Spencer learnt to rap in less than three hours, taught by Ty, and he executed the ad in just one take. You can now listen to the new ads online and vote for your favourite version and find out how the ad was made at zoopla.co.uk/smartsounds.

Alex Chesterman (left) Founder & CEO of Zoopla Property Group said: “Radio is a great medium for us which is why we’re extending our campaign and have launched a new stand-out ad using Phil Spencer. We’re committed to driving property consumers to our websites on behalf of our members and this addition to our comprehensive national radio campaign ensures that consumers understand the benefits of using Zoopla which ultimately benefits our members.”

ZPG last week confirmed that traffic to its websites and mobile apps reached 50 million visits last month with mobile accounting for a record 62.6 per cent of all visits as a growing number of consumers are using the Group’s broad range of services to find agents and search for property while at home or on the move.

Although Zoopla – the UK’s second biggest online property site behind Rightmove – has seen a fall in the number of estate agents advertising on its website due in part to competition from OnTheMarket.com (OTM), it insists that its audience has been largely unaffected by the launch of OTM.

“We are delighted with our continued strong audience levels and the value we are delivering to our members,” said Lawrence Hall (right) of ZPG.

Meanwhile, Russell Quirk, Founder and CEO of eMoov, the online estate agency, claims that OTM’s banning of online estate agents has provided his firm and other online agents with a clear competitive advantage to provide a better marketing service than those high street agents signed up to OTM.

Quirk points out that while online agents are not permitted to list properties on OTM, they can still use both Zoopla and Rightmove, amongst others, with a combined daily traffic of over 4.5 million people, which is significantly more than OTM is currently attracting.

To put this into perspective, the online agent claims that since the launch of OTM, eMoov has been contacted by some 6,000 potential buyers via Zoopla alone.

Quirk (left) said, “OTM, a portal set up with the benefit of the high street agent in mind, has proven to be a flop. They have attempted to cash in on the innovation of those they originally fought against, and the failings in their approach are evident for all to see.

“Far from being troubled by the launch of OTM, we owe a debt of gratitude to Ian Springett [CEO at OTM] who has helped us stand out and has given us a great advantage over OTM members.”

eMoov’s complaint with regard to the ban of online agents to the Competition and Markets Authority (CMA) is still being investigated, however irrespective of the outcome Quirk insists that “we will be in no rush to sign up to OTM”.