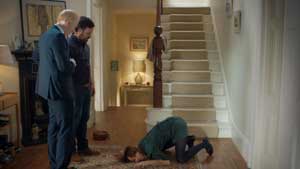 Zoopla is set to return to the small screen on Boxing Day with a series of new national TV adverts. The portal has released a teaser video to give a preview of the forthcoming advert.

The new campaign, which is called “Knowing More”, will be Zoopla’s biggest national campaign to date and includes national radio and ‘out of home’ advertising. It is expected that 91% of the UK will see a Zoopla TV ad on average 37 times during the campaign period.

The first TV ad, which airs on Boxing Day, features an estate agent with a couple and centres around the character of the ‘house whisperer’ – a house-hunter who appears to be ‘communicating’ with the home to find out key bits of information about it and the area, but their source turns out to be Zoopla.

The campaign will be highly memorable, combining humour and entertainment and is designed to convince the nation to start their property search on Zoopla. The adverts will air in some of the most high-profile TV spots on Boxing Day and beyond including: Coronation Street, Live Premier League Football and Gogglebox and will be specifically aimed at increasing the already impressive brand awareness for Zoopla.

Gareth Helm, Chief Marketing Officer for Zoopla Property Group said: “Zoopla took a break from TV and focused on other marketing channels over the last year and has seen some excellent results. We have an opportunity to now move this on further by coming back to TV with a big-bang during what is traditionally one of the busiest periods for TV viewing and the property market. Moving house is an important decision but advertising around it should still be entertaining. We’ll be capitalising upon this with light hearted and fun advertising that will standout against other campaigns, drive more visits to Zoopla, increase brand exposure for our members and ultimately generate more leads for agents listing on Zoopla.”