Bristol agent James Grimsted says the vendor has paused the original sale while she waits for the media frenzy to die down and mulls her £5m artwork.

An estate agent selling a house in Bristol that has made headlines after graffiti article Banksy spray painted a mural of a sneezing woman onto the side the property has admitted that the sale has been complicated by the new artwork.

James Grimsted (pictured), a director of Greenwoods Property Centre and a Guild member, posted an image of the mural on the side of the three bedroom property on his Instagram account, saying: “When Banksy makes one of our property sales slightly more complicated.”

Banksy has confirmed that the mural is by him, but may have lost Grimsted a commission – the owner Aileen Makin is mulling what to do next as a media circus encircles the property and people climb into the harden to gawp at the artwork.

She is also no doubt mulling what to do about the artwork’s value too – the property was for sale with Greenwoods for £300,000but is now likely to be worth much more with the Banksy artwork on the side. Art experts say the mural could be worth up to £5 million.

Her son has now put a protective Perspex cover over the mural, which has been named Aachoo!! by Banksy and is one of Bristol’s steepest streets in the Totterdown district of the city. An Instagram post by the artist, who has seven other murals on properties across the city, has attracted a million views.

“The Banksy [art] piece has made the transaction far more complicated,” says Grimsted. 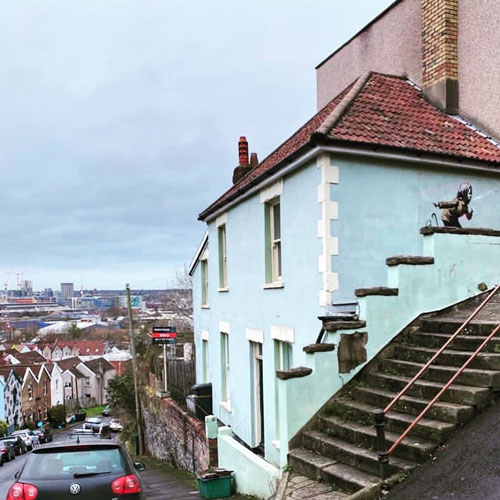 He adds that although there has been much speculation about what the vendor will do next, “at this stage that is all hearsay, and nothing has been discussed or clarified,” he says.

Grimsted and the Greenwoods team at this time are respecting his client’s wishes in order for them to take time and receive appropriate advice.

“Our client needs time to sufficiently evaluate their situation and it is only appropriate that they are allowed to do so, so this has been our recommendation.

“All I can say is this is an unbelievable story, and we will keep all parties involved up to date as it continues to unfold.”