Sign in or Sign up
The essential site for residential agents
Home » News » Agencies & People » We’re giving it a plug! Chestertons is first large UK agency to drive all-electric
previous next
Agencies & People

60 BMWi3 models are part of effort by company to become the UK's first zero carbon agency. 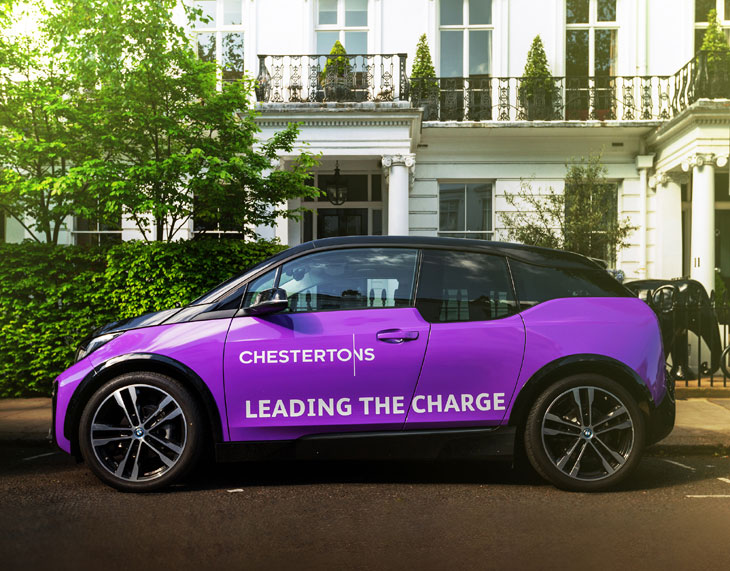 Chestertons, one of London’s largest estate agents, has become the first major estate agency group to replace its entire fleet of company cars with electric vehicles.

The company currently has a fleet of around 60 vehicles on the roads in London, all of which will be replaced by ‘the one that they want’ – all-electric BMW i3s – with the first 30 vehicles hitting the streets in July, which combined will contribute a tailpipe emission reduction of over 20 tonnes of CO2 per annum.

“We have been wanting to make the move to electric vehicles for a while and this year, after switching to electric for a couple of the branches, we decided that improved electric car technology and the increased availability of charge points across the city have now made it entirely practical to replace our entire fleet,” says Guy Gittins, Chestertons MD.

“Our staff have been involved with the trials and are all extremely supportive and excited about our road to becoming the first zero-emissions estate agency.”

BMWs have long been the car of choice for many estate agents with a range to suit every level of employee, including of course the Mini, which became the favourite for Foxtons, but now the BMWi3 is likely to be a frontrunner in our crowded cities.

Alex Williams, Transport for London’s Director of City Planning, said, “Toxic air pollution leads to thousands of premature deaths in the capital every year. London’s lethal air is a public health crisis and it is fantastic to see a company like Chestertons helping us to reduce road transport emissions across the capital.”

Chestertons’ fleet of electric vehicles will be provided by Lombard Vehicle Solutions via its partner, ALD Automotive. Matt Dale, Head of Consultancy at ALD Automotive, said: “We’re delighted to be able to support Chestertons with this bold and industry-changing move. We hope they can now be the benchmark that other companies can follow.”

In an additional move to reduce the business’ carbon footprint, Chestertons is also in the process of changing the energy supply so that all of its 33 London branches use only renewable energy.