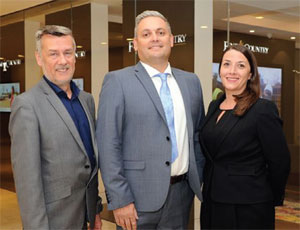 Fine & Country has opened a new office in Birmingham’s prestigious shopping location, The Mailbox. The office joins the network of estate agents in over 300 locations worldwide, representing the brand’s expansion in the West Midlands.

Not that long ago Birmingham would not have been a likely branch opening location for an upmarket brand like Fine & Country, but the city’s retail and economic revival over the past decade and particularly strong over the past 18 months.

This has included a £750 million redevelopment of its main train station and central shopping area and later this year the much-anticipated start if work on the government’s £42.6 billion high-speed train line between Birmingham and London.

The new Fine & Country office is headed by Sean Newman (pictured, right in the centre) who has 30 years in the property sector. He says: “The Mailbox is one of Birmingham’s most iconic destinations. Fine & Country will fit in perfectly alongside prestigious neighbours including Armani, Harvey Nichols and Hugo Boss, as well as a huge range of restaurant and entertainment options. Our high-end properties cater perfectly to those who shop at the Mailbox.

“The new showroom will promote Birmingham and appeal to buyers from around the world. Last year, 6,000 people moved from London to Birmingham, with our head office on Park Lane, London, we are well positioned to attract wealthy London and international buyers to view our high-end homes in Birmingham and the wider region.”