Sign in or Sign up
The essential site for residential agents
Home » News » London property firm to pay back £60,000 in rent after operating unlicensed HMO
previous next
Regulation & Law

London property firm to pay back £60,000 in rent after operating unlicensed HMO

Finchley Properties Limited operated the address, which was found by Camden council inspectors to be a 'house of horrors'.

A company that owns and rents out properties in London is to pay back over £60,000 of the rent it charged after its tenants were discovered by council inspectors living in ‘house of horrors’ conditions.

Finchley Properties Limited, which has offices in West Hampstead, rented out separate flats within the Victorian property (pictured) above a shop on the Finchley Road between March and November 2017. 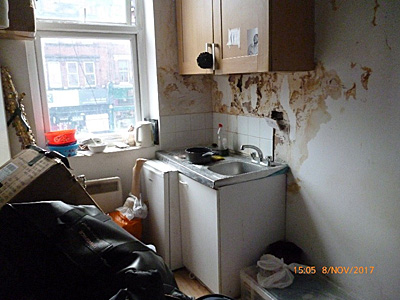 Tenants complained about severe damp to the London Borough of Camden whose officers, after visiting the address, found filthy walls rotting with damp, holes in the ceiling and exposed wires and electrics (pictured, left).

The company has now been found guilty by a First Tier Tribunal of being in control of an unlicensed HMO, and will now have to hand back 70% of the profits made from the house, much of which came from tenants in receipt of housing benefit.

Camden also found that the property, which had been converted twice, failed to meet building regulations and included three flats that had been created without planning permission.

Its environmental health officers also prohibited two of the flats from future use as they were found to lack adequate levels of natural light.

“HMO licensing exists to stops situations like this existing and escalating out of control. Landlords and lettings agents need to play by the rules and ensure if they are running an HMO it is properly licensed,” says Councillor Meric Apak, Councillor for Better Homes at Camden Council (right).

“We can then work with them in turn to ensure the property is properly maintained for the good of its tenants.”

Speculation rife over why Winkworth share price is ‘rocketing’