Damming research into buyers' attitudes reveals how much the public now considers new homes to be poor quality and too expensive. 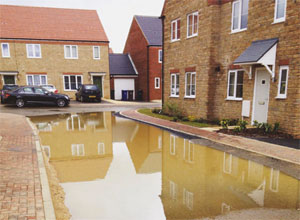 Nearly a quarter (24%) of people consider a lack of quality of build to be a major disadvantage of buying a new build home over an older property, according to a recent survey by BLP Insurance, a specialist residential warranty and commercial latent defects insurer.

People living in the north of England (29 per cent) were more likely to view a lack of quality of construction as a major disadvantage of new build homes compared to those people living in London and the south east (21 per cent).

Other disadvantages of new builds identified by respondents included lack of character (26 per cent), the size of rooms (24 per cent), and price (21 per cent).

The survey also revealed that 29 per cent of people do not believe there were any benefits in purchasing a new build home; those over 55 are especially sceptical about the advantages (41 per cent).

Kim Vernau, CEO of BLP Insurance, said, “Poor build quality is an increasing issue in the UK housing market. As developers attempt to meet the high levels of demand for new homes, practical design and quality is being compromised.

“As more and more buyers become aware of the issues that poor quality of build gives rise to, all parties involved in the construction of new homes will have to respond, taking greater responsibility and ensuring quality of the build process.”