Analysis of those who have signed e-petition calling for ban to be replaced with a fees cap reveals where opposition is most vocal. 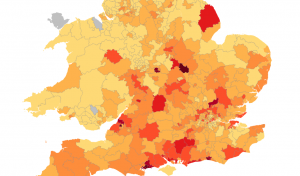 SIGN THE PETITION AGAINST THE LETTINGS FEE BAN HERE

Opposition among agents to the government’s tenant fees ban is strongest in rural, Conservative-voting area of the country, The Negotiator can reveal.

Analysis of the 8,500 people who have so far signed an e-petition calling on the government to do a U-turn on the policy and instead bring in a fees cap reveals that the areas with the most signatures are all rural and semi-urban areas with Conservative MPs.

The only exceptions to this rule are Coventry, six of London’s inner boroughs including Battersea, Bermondsey, Limehouse, West Ham, Ealing and Finchley, plus, Brighton and Hove, Bournemouth and Bristol West.

The areas where most people have signed the petition are in parts of Hampshire, Somerset, Wiltshire, East Sussex, Kent, Essex, East Anglia, Oxfordshire, Northamptonshire and Lincolnshire.

Opposition to a ban is weaker in the north although there are hotspots of people signing the petition in North Lincolnshire and Lancashire.

The constituency with the highest number of signatures is in Kettering, where 75 people have signed it, held by Tory MP Philip Hollobone. Running a close second is Bournemouth West with 70 signatures, held by another Tory, Conor Burns.

The e-petition, which The Negotiator is urging all agents to sign, was initiated by an Essex lettings firm Friend & Farrelly Property Services.

“Tenant fees are a must to survive as a business, we will have to pass on our lost fees to landlords, speaking to our landlords they plan to raise their rents to cover their fees immediately,” says Rob Farrelly (pictured, left).

“This action makes no sense at all, we can keep everyone happy, set a reasonable cap so tenants, agents and landlords can continue to survive comfortably.”