Sign in or Sign up
The essential site for residential agents
Home » Features » How will the Scottish independence referendum affect property?
previous next
Housing Market

How will the Scottish independence referendum affect property?

Robert McCulloch, Partner at Strutt & Parker in Edinburgh, reflects on the impact that the Scottish independence referendum debate is having on the property.

There are less than two months to go until the Scottish public makes its seismic vote in the Scottish independence referendum on whether or not it wants Scotland to leave the United Kingdom.

Politically, the gloves are off with the pugilists on either side becoming increasingly aggressive as the “fight for votes” enters its final couple of rounds. Speculation about the outcome of the vote and the potential consequences of either result is rife, and nowhere more so than in the Scottish property market.

As a firm of agents handling sales nationwide, from flats and townhouses in central Edinburgh to holiday cottages in the Western Isles and sporting estates in the central Highlands, we at Strutt & Parker are well placed to judge the effect of the uncertainty that the referendum is creating.

In all market sectors at present, the subject of the independence referendum is dominating conversation. When we meet new clients to inspect their property, the opening half hour of our discussion usually centres on the referendum and its impact on the property market.

The reality is that different sectors are responding in different ways to the undoubted uncertainty that prevails. In central Edinburgh, demand for two- to four-bedroom flats and houses between £150,000 and £400,000 is higher than for several years, with sales being achieved quickly and often at premium prices; driven by a shortage of supply, improved availability of mortgage finance and the Government-backed Help to Buy scheme. At this level, there is no obvious “referendum effect”.

At higher levels of value – £500,000 to £1 million+ – transactional activity has fallen year-on-year in Edinburgh and rural areas. For buyers in this sector, a vote for independence could mean the relocation of their job or a possible reduction in value of their existing property. Therefore, it is unsurprising that a significant proportion say that they are awaiting the outcome of the vote before committing to buying a property.

In contrast, farmland values have been steadily rising over the last six years, on the back of a general supply-demand imbalance. The referendum effect is partly accountable, although the caution created is afflicting vendors more than purchasers. It is compounded by the Common Agricultural Policy reform, which takes effect from 2015 and fundamentally alters the basis on which farmers can claim their European Union Subsidy and the amount they receive.

The Scottish estate market is an interesting case study in terms of the referendum effect. Over the last five years, this sector has varied from 23 transactions in 2012 to 13 in 2009. The money invested ranged from £34 million in 2009 to £81.5 million in 2011. Last year, 16 estates were sold in Scotland, this year just two estates have been launched, with one of these having been sold to date. This is a remarkable reduction in supply, undoubtedly due partly to the referendum effect. Whilst, understandably, some putative buyers will not invest until the votes have been cast on 18 September 2014, it seems that the lack of supply of estates for sale is due to the vendors’ caution rather than the buyers. 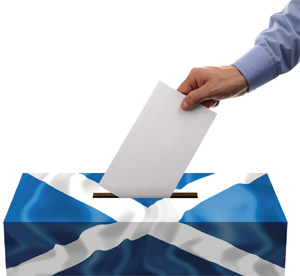 The pugilists get more aggressive as the debate rages…

Providing a commentary on current market conditions is easy, predicting the future beyond the referendum is considerably more difficult. Talented estate agents we may be, clairvoyants we certainly are not!

Our clients look to us to provide an answer to the question of “what lies beyond?” but the truth is that we have no better idea than anyone else.

Current polling shows that 53 per cent of the population will vote ‘no’ in September, 36 per cent will vote ‘yes’, 11 per cent being undecided. This suggests that a vote for independence is, in reality, unlikely and, therefore, it is easier to predict the effect of the expected result becoming reality.

My view is that a vote to remain beneath the economic “security blanket” of the UK will inject confidence into all market sectors. With the brakes of caution removed, the rising tide of economic recovery which has washed through most sectors of the English market is likely to belatedly benefit Scotland. This may boost property supply, which may impact on prices in the short-term but should result in stability within a year or two.

The effect on the property markets of a vote for independence is impossible to predict. What is certain is that there is an enormous amount of detail to be worked through in actually achieving independence by the target date of March 2016. This will cause confusion and uncertainty for the foreseeable future, and no sector of any property market thrives on prolonged uncertainty.