445 per cent uplift in income for the year to 30th April came as, “Customers are increasingly being won over to our hybrid model.” 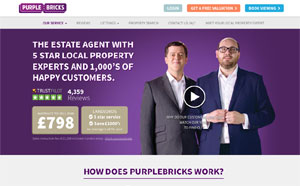 The figures are fabulous, the hype is huge, but is Purplebricks too good to be true?

Purplebricks may be one of the UK’s youngest estate agents but it is certainly going down a storm with investors. Having listed on the Aim market in December its shares have gone up by 62 per cent.

It claims to be the fastest growing estate agent in the UK and has just launched in Scotland. Purplebricks says it takes just 14 days on average, to sell a home, or six days, on average, to let a property. It also claims to save sellers an average of £4158.

With a reported 6,941 listings on its website, compared with 6,869 for Foxtons, (according to the FT) it is certainly making massive inroads to the UK property scene.

Michael Bruce, Chief Executive, said, “With solid underpinnings, momentum and the size of the market opportunity, we are confident in proving the business model and delivering value for all of our shareholders.”

However, nobody seems to be saying how many properties they have actually sold or let, which, even if they say revenues are impressive at £18.5 million, the sales and lets must be a key set of figures.

If the instruction fee of £798 for a sale is all that sellers need to pay, (for simplicity – leaving lettings out of the equation) they would have sold 23,182 homes, which would be impressive, but maybe unlikely. If just half of sellers took the extra ‘service’ of a For Sale board, that would reduce the sales number to 21,561, which still seems incredible. However, the website doesn’t divulge the extra cost for the mandatory EPC or for viewings, which could make a significant difference to the calculation.

In a recent interview with The Negotiator magazine, Michael Bruce (left) said that Purplebricks is a hybrid agency, not to be included with the standard online newcomers, “I think we’re very different from the other online agents,” he says. “From our perspective we’ve invested massively in technology and in people whereas the other online and non-traditional competitors haven’t quite done the same.”

But they are still cagey about the current state of play. Anthony Codling, analyst at Jefferies, said that the number of homes sold or let was an important omission. “The valuation suggests that Purplebricks is the darling of the stock market and that investors expect the challenger to be successful in its challenge to the traditional UK estate agency model. However, before we pass judgement we would like to know how many homes it has helped sell.”

Purplebricks charges a fixed £798 (up by 20 per cent from £665 in January 2014) plus value added tax, or £1,158 plus VAT in Greater London, chargeable whether or not a home is sold. And, of course, that fee is payable whether or not they sell the property, a factor which could make a significant difference to the numbers of homes sold or let.