Designs on Property tracks and summarises the property indices: “Nearly all the indices are heading to a zero increase year on year” as home buyers wait, wait, and see…

Headlines – the effect of Brexit? 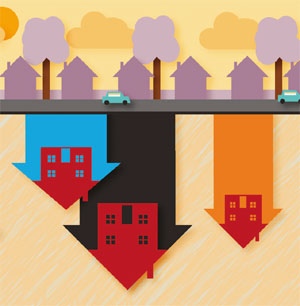 Rightmove: “Muted rise in prices but market moving with 5% uplift in home-hunting.”

Average prices across the indices vary from mortgaged-only prices from the Nationwide HPI of £211,996, through to marketing prices (ie not necessarily sold) from Rightmove of £298,734 and actual prices from LSL Acadata HPI of £306,647. Average sold prices from the UK HPI stand at £230,630. There is a 44% difference between the highest average price from LSL which includes cash sales and the lowest from Nationwide which reflect mortgaged homes.

Kate says: Nearly all the indices are heading to a ‘zero’ increase year on year, bar UK HPI which measures the housing market some months behind the rest. These figures normally relate to ‘talk’ in the media of a house price crash, but as most of the reports point out, the market is surprisingly resilient considering the level of uncertainty, not just from Brexit but this month from a poor economic performance. The BBC recently reported that our economic growth was at its slowest since 2012, claiming ‘the economy has hit the brakes harder than economists thought it would’. Taking economic and property reports into account, the housing market could go one of three ways this year:

London and the South and East are holding back growth in England year on year, but since the recession it’s very clear this growth has driven the housing market well. Although Wales is doing very well year on year according to UK HPI data, other reports suggest growth is now slowing. It’s a similar picture in Scotland too. It is quite astonishing the property market in these areas – and indeed Northern Ireland continues to do well currently when in comparison to the last 10 years, real versus nominal growth has been non existent. This shows that whatever the market is doing, people do still need to move.

Pre-2005, property prices tended to move ‘in the same direction’. London would grow, then the regions would follow, London falls and so would the regions. The chart below shows that this isn’t the case anymore. This chart compares the year on year changes; average annual changes since the 2007 recession and then back to 2005. This data shows that property price growth is now anything but smooth and certainly hasn’t achieved the previous ‘long term growth’ tracked by Nationwide of property prices outstripping inflation by over 2.5%. In fact, what this information shows, is in many areas, based on annual inflation being around 3% per year since 2005, only the East and London have seen house prices perform above this level and that’s for the last 15 years. In many areas, property prices in real terms have fallen. However as LSL point out at the moment, this doesn’t seem to be affecting consumers: “The fact that house prices in many parts of England & Wales are falling in real terms remains of limited interest to most participants, at least while nominal (actual) gains are still being recorded.” The question is, what will happen when people realise prices aren’t rising at the same level as they were in the past?

Home.co.uk: “Prices continue to fall in London, the South East and East of England. In fact, the rate at which prices are correcting in these regions is increasing. London’s losses over twelve months have extended to 3.2%. Further erosion of asking prices in the South East and the East has now precipitated losses of 1.9% and 0.8% respectively. The South West is now the fourth region where growth has become year-on-year negative. Together these four regions account for around half of the UK’s dwellings. However, significant housing market vigour is still apparent in some regions and support for headline growth is nowhere more prevalent than in Wales and the West Midlands where asking prices are 5.7% and 5.1% higher than they were a year ago. Regions further north also show solid growth. The North West and Yorkshire have pushed up their average asking prices by 4.5% and 4.1% respectively since January 2018.”

RICS: “Prices continue to soften in London and the South East, while respondents in East Anglia, the South West and the North East also report negative trends. All other areas continue to see prices rise, led by solid growth in Northern Ireland, the North West of England, as well as Scotland.”

Kate says: From a regional perspective, there are clearly vast differences, but these pale into insignificance when you look at the cities’ data. There is such a stark difference in performance, with the likes of Belfast property prices still 40% lower than they were in 2007, while Newcastle is struggling to gain much ground since 2005. Most cities have kept up with inflation since this time, but only if bought in 2005, anyone buying since that time is likely to have seen negative real property price growth, with only the regular ‘hotspots’ of Oxford, Cambridge, London, Brighton, Reading and Bristol seeing property prices in line with or slightly above inflation increases. Considering more people are owning a home outright, it will come as a surprise to that their property in real terms, is actually worth less than it was 10-15 years ago.

Kate says: It’s clear that few places are seeing any decent transaction growth. LSL estimates a 2.5% fall in 2018 and this year could go one of three ways depending what happens with Brexit and at a global level. So far, transactions have held up probably better than ever before considering the low price growth figures and uncertainty in the housing market. Feedback from agents suggests the demand and supply is still there, but not perhaps the confidence to make offers at the level seen before.

LSL Acadata HPI: “In December 2018, there were an estimated 78,250 transactions – based on Land Registry counts for England & Wales – which is a 6.6% fall on our revised November figure of 83,750 sales. One would normally anticipate an upward movement in sales volumes of +1.5% at this time of the year, so the decrease of -6.6% represents a negative -8.1% fall in transactions on a seasonally-adjusted basis.

NAEA Propertymark: “The percentage of properties sold to FTBs increased marginally from 23 per cent in November to 24 per cent last month. Year-on-year, sales made to the group are down eight percentage points from 32 per cent. The average number of sales agreed per branch fell for the third consecutive month – from nine in September, eight in October, seven in November and to five last month.”

The Advisory tracks current housing market conditions. So buyers and sellers can gain an independent view of how easy it would be to buy and sell their home in their area. This makes it easier for good agents that are honest about market conditions to value and manage expectations. For example, in BS3 75% of the properties on the market are under offer.

RICS: “New buyer enquiries reportedly fell for a fifth month in succession, with the net balance coming in at -17% (compared to -20% in November). This decline in demand was again matched by a deterioration in the flow of fresh listings coming onto the housing market, as the survey’s indicator on new instructions remained in negative territory for the sixth report in a row. Looking back further, new instructions to sell have now declined in 19 of the previous 24 months. Given this, it is little surprise that stock levels on estate agents’ books remain close to record lows, currently standing at an average of just 42 properties per branch.”

NAEA Propertymark: “As sellers continued to market their homes in December, the supply of available housing increased by a fifth (20 per cent) from 35 in November to 42. This is the highest level seen for the month of December since 2014. In December, the number of house hunters registered per estate agent branch increased by eight per cent, from 282 in November to 304. Year-on-year, demand is up 13 per cent, from 268 in December 2017.”