Designs on Property tracks and summarises the property indices. Kate Faulkner says, “For most regions, even the power houses of the Midlands, price growth across all regions bar the North West are below rates of inflation, meaning in real terms house prices are falling.” 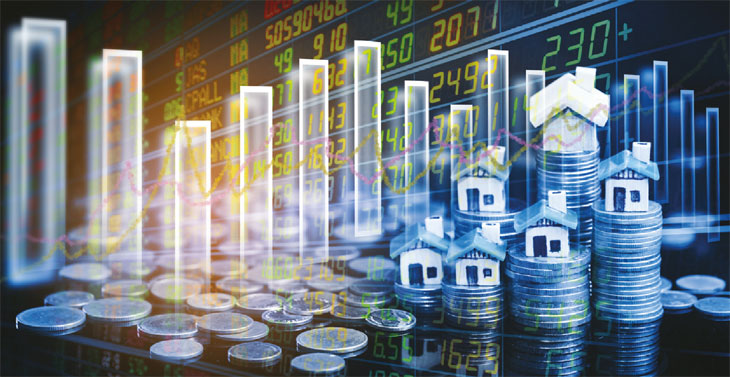 Rightmove: “First drop in prices this year signals buyers’ market in second half of 2019”

Hometrack: “UK city house price growth is running at +1.7% as the rate of price inflation continues to slow.”

Average prices across the indices vary from mortgaged-only prices from the Nationwide HPI (Jul 19) of £217,663, through to marketing prices (ie not necessarily sold) from Rightmove (Jul 19) of £308,692 and actual prices from LSL Acadata HPI of £300,039 (Jun 19). Average sold prices from the UK HPI stand at £229,431 (May 19). There is a 38% difference between the highest average price from LSL which include cash sales and the lowest from Nationwide which reflect mortgaged homes. UK HPI Market analysis by country Versus last month, property prices ‘on average’ have really slowed across all countries. For Wales, Scotland and Northern Ireland, they are only just keeping up with inflation – which with over 50% of people who own a home, owning it outright, means no real house price growth so far this year and for those in England with just 1% increase registering, real property values are actually falling.

Regionally the differences are stark. Not just from a price perspective but also from different regions showing different trends. For example, London up +53% versus 10 years is not surprising, and certainly as predicted by many, down by -4.4% year on year, but the North East is down year on year too. OK, it’s only -0.7%, but considering property prices are still -8% below their average 12 years ago, these are certainly new trends in our property market when both previously strong and weak markets start to fall back.

While regions perform well below previous growth levels, citywise, things are looking better – for some.

For most regions, even the power houses of the Midlands, price growth across all regions bar the North West are below rates of inflation, meaning in real terms house prices are falling. The question few know the answer to and if they turn out correct, it’ll be a good ‘guess’ as to whether the new ‘Brexit’ deadline will come and go without affecting the property market or will the fall in the pound mean an unexpected boost for London as international investors can see prices getting a whole lot cheaper.

RICS: “At regional level, with the exception of London, the South East, Yorkshire and Humberside and the East of England, all parts of the country are showing results that are consistent with further (in some cases modest) house price growth. Contributors envisage that this largely stable trend in national house price inflation will persist over the coming three months. However, twelve-month expectations are displaying a little more momentum with 25% more respondents anticipating prices will rise, the highest reading for this indicator in eleven months.”

LSL Acadata HPI: “Nine of the 10 GOR regions have seen their rates of annual price growth increase during May, with the largest change being in Wales at +2.0%, followed by the North East at +0.9%. The one GOR area in May to have seen a modest decline in its annual rate of growth is the East Midlands which slowed by -0.4%, with all the ‘Shires’ in the region, except for Derbyshire, seeing prices fall during May.”

Hometrack: “Seven cities are registering house price growth of less than +1% per annum – the first time we have seen this since June 2013. All these cities are in the south of England except for Aberdeen where price growth is -3.2%. Edinburgh (+5.1%) is registering the highest growth, followed by Liverpool (+4.9%) and Cardiff (+4.7%). There is a growing polarisation in market conditions across southern England and the rest of the country. Bristol has the highest annual growth rate in southern England at +2.0%. The remaining six cities are all registering growth of between -0.3% and +0.8% as affordability constraints impact demand, resulting in a lower rate of house price inflation. Weaker demand means sales are not keeping pace with the new supply of homes for sale. Increases in supply are compounding the downward pressure on prices in southern cities. The opposite is true elsewhere.”

Although our regions are performing well below previous growth levels, city wise, things are looking better – for some. According to Hometrack, “Edinburgh (+5.1%) is registering the highest growth, followed by Liverpool (+4.9%) and Cardiff (+4.7%) showing how localised property market performance can be.

Considering the battering the economy is getting in the press and the fear of Brexit still looming, this month offers quite a positive picture, with the RICS reporting “a more stable trend in supply as far as the latest set of results are concerned with the new instructions indicator edging into positive territory for the first time in a year.” Talking to agents and developers, June and July haven’t been bad months, the question is whether the likely bad press about a recession and continued Brexit fears will mean people start ‘battening down the hatches’ come September – as they did last year to ‘wait and see’ what happens in the New Year. Let’s hope instead the pent up demand that definitely still exists carries the market to the end of the year and people’s confidence returns in 2020, if all remains calm!

“The number of house hunters registered per estate agent branch fell marginally in June, from 307 to 305. Yearon- year, housing demand is almost aligned, with just a one per cent difference from June 2018 when there was an average of 308 house hunters per branch.” (Jun 19)

RICS: “The New Buyer Enquiries net balance came in +10% in June. This is the first time since November 2016 where contributors have reported a modest rise in the appetite for potential purchasers to acquire property at the national level with demand reportedly increasing in seven out of twelve regions covered in the survey. Meanwhile, there are signs of a more stable trend in supply as far as the latest set of results are concerned with the new instructions indicator edging into positive territory for the first time in a year.

“The Newly Agreed Sales net balance edged up to +2% in June marking the first time in ten months where survey participants did not report a decline in activity on this basis. Sales expectations for the coming three months suggest that the stable trend in transactions volumes is likely to persist.”

Bank of England: “Mortgage approvals for house purchase (an indicator of future lending) increased by around 800 in June to 66,400 and the number of approvals for re-mortgaging rose slightly to 47,000. Notwithstanding these small rises, mortgage approvals remained within the narrow ranges seen over the past three years.”