Sign in or Sign up
The essential site for residential agents
Home » Features » Busy, busy, busy…
previous next
Housing Market 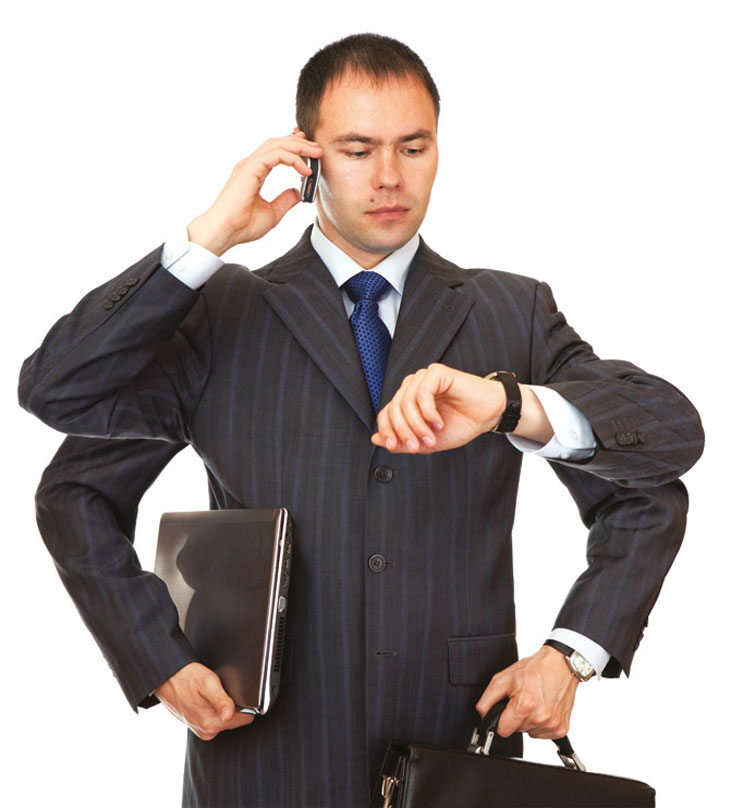 NAEA Propertymark “One in eight properties sold for more than asking price in August.”

Kate says: I bet you are all shattered! The news from all the indices is that transactions are achieving levels we haven’t seen for a long time. Nationwide states, “Mortgage approvals for house purchases rose from 66,000 in July to almost 85,000 in August – the highest since 2007, well above the monthly average of 66,000 prevailing in 2019.” while the NAEA figures show that the “average number of sales agreed per estate agent branch stood at 12 in August, a slight decrease from 13 in July [which is] the highest figure recorded for the month of August since 2007” and that “year-on-year, the number of sales per branch has increased by 33 per cent, rising from nine in August 2019.”

Transactions are achieving levels we haven’t seen for a long time.

It’s quite clear that the market volume-wise is doing extremely well and we know that everyone is going to have to be patient while lenders and legal companies in particular are being put under huge amounts of unexpected stress and strain, albeit it is severely affecting all of the home moving industries with the removals industry struggling to keep pace too.

What’s interesting though is that we aren’t seeing double digit price growth as we would normally see during these ‘boom times’. Yes prices are rising, but at a much lower rate than we’ve seen in the past, and considering since 2005, the average increase year on year to date ranges across the indices from 2.7% to 3.6% (see the table), it’s not far off the current 2.5% to 5%.

According to Hometrack, the answer lies in stock. They explain, “More buyers… bring more supply to the market and available sales inventory is 10% higher than a year ago. Greater supply increases choice for buyers and will keep the rate of house price inflation in check.”

Rightmove “The trend of up-sizing to a larger home has continued at pace over the past month, leading to record asking prices in the second-stepper sector, made up of three- or four-bedroom homes. This price record has been fuelled by buyers looking for more space, including both those who need extra space for their families and those looking for room to work from home. Overall prices have remained steady since they hit a record in July, up by a marginal 0.2% on the month, and up by 5.0% annually, which is the highest annual growth rate recorded since September 2016.”

RICS “House price growth continues to gain momentum, as the survey’s headline indicator on prices climbed once again to post a net balance of +61% (up from +44% last time).”

Nationwide “UK house prices increased by 0.9% month-on-month in September, after taking account of seasonal effects, following a 2.0% rise in August. As a result, there was a further pick up in annual house price growth from 3.7% in August to 5.0% in September – the highest level since September 2016.”

Halifax “The average UK house price is now approaching £250,000 after September saw a third consecutive month of substantial gains. The annual rate of change will naturally draw attention, with the increase of 7.3% the strongest since mid-2016. Context is important with the annual comparison, however, as September 2019 saw political uncertainty weigh on the market.”

Hometrack “House prices continue to increase as demand runs ahead of supply across the UK housing market. The annual UK growth rate is +2.6%, up from +1% a year ago.” 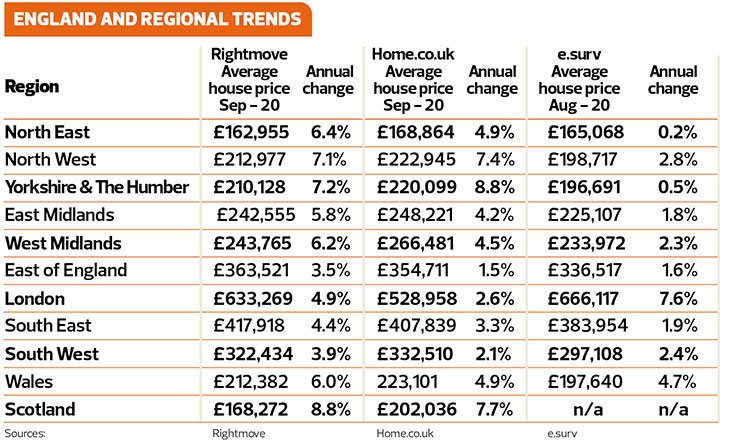 Kate says: As ever, each region is performing very differently, with the spread here in price growth ranging from 0.2% in the North East from e.surv through to a huge 8.8% in Scotland reported by Rightmove. Typically, regional highs and lows are reasonably in line, but the table shows that there are vastly different views from those indices which focus on marketing prices (Rightmove) and those which look at actual sold prices (e.surv).

This is likely to be an issue with data from the past and timing of the information, so it goes without saying that agent price data for individual properties will be much more useful over the coming months than confusing headlines of prices being up in their region from 0.2% to 6.4%! 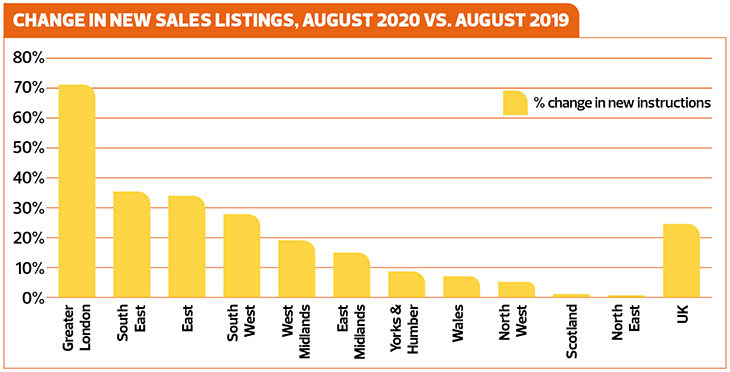 Kate says: With property transactions pretty much booming in most places, as with prices, the difference is very regional. Areas such as London, the South East and East are, according to Home.co.uk, seeing huge jumps in listings while Scotland and the North East are seeing little change. No doubt that this will vary from street to street, but it’s important to make buyers and sellers aware of what’s really happening in their area to make sure they understand they aren’t necessarily likely to be able to enjoy the boom some others are enjoying across the country.

Rightmove “The strongest sector is ’top of the ladder’, which includes four-bedroom detached homes and larger. Sales agreed, compared with the same period last year, more than doubled in August in this sector, up by 104%. While in the second-stepper sector (three- or four-bedroom homes excluding four-bedroom detached) they were up by 55%. The first-time-buyer sector of two bedrooms or fewer saw sales agreed up by 36%.

“Nationally, sales agreed YTD are now down by only 5% on the same period last year. East of England (+4%) and the South East (+1%) have already overtaken the number of sales agreed for the same period last year. Unsurprisingly both Scotland and Wales, still playing catch-up, are now down by 21% and 16% respectively. In London, sales agreed for the year to date are down by just 3%, with a two-speed market in play. Strong activity in Outer London has helped the Capital to climb back to being the second fastest region for the average time taken to secure a buyer, now being beaten only by Scotland at 35 days. The average number of days to agree a sale in London is now 49, a significant 20 days shorter than at this time last year.

RICS “During September, +52% of survey participants reported an increase new buyer enquiries. This marks the fourth consecutive monthly pick-up in demand, albeit the latest reading represents a slight moderation compared to +75% and +63% in July and August respectively. Similarly, new instructions coming onto the sales market also rose for a fourth month in a row, which now signifies the longest stretch of rising supply going back to 2013. Furthermore, +48% of contributors reporting that appraisals are up in annual terms, the pipeline for instructions over the coming months appears to be solid. Even so, it should be noted that, despite the recent improvement, stock levels remain relatively low in a historical context.”

“The impetus for price rises shows no signs of slowing as new buyers continue to enter the market. Since the start of the year, demand for housing is 39% higher than at this stage last year. More buyers also bring more supply to the market and available sales inventory is 10% higher than a year ago. Greater supply increases choice for buyers and will keep the rate of house price inflation in check.

The strength of the recovery so far is highlighted in new sales agreed which over the last nine months are 3% higher than over the same period last year – and this with a 50-90 day closure of the housing market. The 3-4 month lag between sales agreed and legal completion means we will not make up all the ground lost [-15% YOY] during the market closure this year.