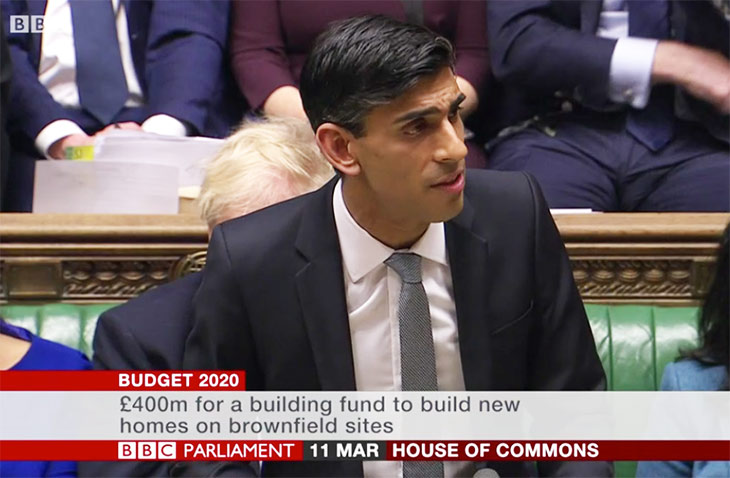 A massive £30bn stimulus package to boost the UK economy in the wake of the coronavirus outbreak has been unveiled by Chancellor Rishi Sunak.

In his first Budget, he announced a business rates holiday for small businesses and leisure outlets that will see nearly half of all businesses not paying any rates at all over the next 12 months.

The Budget included major initiatives to boost UK housebuilding. Included in the package is a £12bn, multi-year settlement to extend the Affordable Homes Scheme.

There will also be an allocation of £1.1bn from the Housing Infrastructure Fund to build nearly 70,000 new homes in high demand areas across the country.

In addition, a £400m fund will be made available to the eight Metro mayors to help build new homes on brownfield sites, while to help local authorities, interest rates on lending for social housing will be cut by 1%.

The Metro mayors will also get new, London-style funding settlements, worth £4.2bn every year, and 22,000 civil service jobs will be moved out of central London to the regions.

In a move that may dampen the prime central London real estate market, a stamp study surcharge for non-UK nationals will be introduced at 2% from 2021.

The £30bn stimulus announced in the Budget is the same amount spent in 2009-10 to boost the economy after the financial crisis. According to the Office for Budget Responsibility, it is the biggest fiscal boost for 50 years.

As well as tax relief for business and cash for the NHS, the Budget opens the door to a huge range of infrastructure spending, including £27bn on new roads.

Spending is boosted, too, on science and research to £22bn a year – the highest percentage of GDP in nearly 40 years.

A loan guarantee scheme is be launched for banks lending to small businesses up to £1.2m.

Business rates will be scrapped for the next year for hospitality companies, venue owners, galleries and cinemas with a rateable value of up £51,000 to help cushion the blow from falling demand due to the coronavirus.

The roughly 700,000 smaller businesses that already pay no business rates will instead receive a £3,000 cash grant worth £3bn.

Reaction to the Budget has been largely positive.

James Greenwood of Stacks Property Search said, “We welcome the steps the Chancellor has taken to improve the housing infrastructure and address the terrible homeless situation. But we would have liked to see more on housing in the Budget to help free up underused property.

“We’re very pleased he hasn’t messed around with Stamp Duty; what UK buyers and sellers need is certainty. The 2% on non-resident buyers is generally digestible, it’s likely to impact London, but look at the land and property taxes that non-residents pay in other countries, and UK tax is relatively benign. We don’t believe it will have a detrimental effect on the market generally.

“Improved investment in infrastructure is likely to create property hotspots as people are attracted by improved journey times and connectivity. But the benefits of these improvements are unlikely to be evident in the short term.”

Lee Lucas, Principal at the Fashion Retail Academy, said, “The Chancellor’s announcement that business rates are to be abolished will be a huge shot in the arm to the British high street.

“Retailers, who have been demanding cuts, will be celebrating today after the much needed announcement that the Chancellor will be slashing their bills.

“It will be particularly welcome news for fashion retailers after a tricky few years battling intense pressure from online rivals and, now, the full impact of the coronavirus.”

Mark Hayward, Chief Executive of NAEA Propertymark, saidthe 2% stamp duty surcharge for overseas buyers would allow those in the UK to have a better chance of purchasing a home.

“However, overseas buyers tend to purchase properties in prime central London which are completely unaffordable to most homebuyers anyway,” he said.

“Ultimately, by energising surcharges, it is likely that purchasers will factor this additional cost into any offers they make on a property so prices may be pushed down in areas where overseas buyers are purchasing.”