Nigel Lewis talks to the boss of one of the more unusual and colourful letting agents in the Capital. 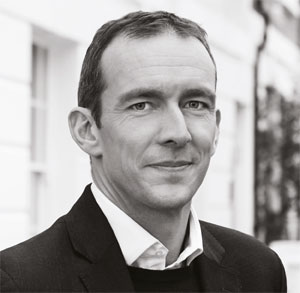 The reason why we’re talking to Charlie Woods from legendary West London lettings agency Russell Simpson is that the firm is celebrating its 30th anniversary operating within the rarefied stucco streets in and around the London borough of Kensington and Chelsea.

The company is not your average lettings agency. It has two branches, albeit they are not high street ones with branch windows and the company’s marketing is discreet with a capital D, based on contacts and networks, rather than squeezing digital leads out of Rightmove or Zoopla. Or in other words, how most agents used to operate until the Millennium and the arrival of the internet.

I’ve pretty much seen everything, including boom and bust and back again.

After a brief spell as a Carphone Warehouse branch manager, Charlie Woods has worked for the past 24 years in central London lettings initially for W.A.Ellis before joining Russell Simpson in 2017. He now leads the firm’s six-strong lettings team from its premises on Anderson Street in Chelsea, the other office being located within a building just off Kensington High Street.

“I’ve pretty much seen everything including boom and bust and back again including the Lehman Brothers meltdown, then Covid and now the cost of living crisis,” he says.

“One feature of downturns is that the good agents who give the best advice prove their worth – those driven by daily targets tend not to give good advice, which shows when the market gets tough.”

So how did Covid impact your business?

There’s never a dull moment in lettings – unlike sales which can go quiet during difficult times – and we were flat-out during Covid – ensuring people could pay their rent. People assume life is easier because many of our areas are on or near ‘Monopoly board’ streets but the tenants had the same worries and requirements as everyone else.

“Like millions of other people, they had to work from home, do Zoom calls and meetings and deal with children taken out of school at the same time. The one thing that changed was that location, location, location became instead a hunt for more interior and exterior space.”

Have you seen the ‘stock drought’ reported so often within the industry in recent months?

“We have – the people who are wanting to invest in London PRS property feel that it’s not that attractive right now so although existing landlords are looking to expand their portfolios to gain economies of scale, the smaller ones looking to enter the central London market are staying away for the time being.

“The Government’s policies are coming home to roost – some buy-to-let investors are put off by the additional tax burdens and the loss of tax breaks seen in recent years. It’s no longer such an easy profit and loss equation to calculate as it used to be over a 5-10 year forecast.

“Nevertheless, the long-term landlords, you can argue, are benefitting from this drought because rents are rising when tenancies come up for negotiation, and bidding wars take place. This has pushed up rents by between 12 and 15 per cent recently.”

Is it true that ‘off market rentals’ are increasingly a thing now?

“It’s become more of ‘a thing’ because, at Russell Simpson, we’re all about relationships and contacts [rather than digital marketing] including our key work with finding agents and relocation agents. Their clients are looking for a certain type of rental property, and we use our network of contacts to put the feelers out and connect their precise requirements with available properties that haven’t been marketed yet.

We do have famous people we deal with, but there are just too many to remember…

“The people who will rent an eight-bedroom house in Chelsea or Notting Hill won’t be trawling through Rightmove or Zoopla; they will employ people to do that for them so if you look after the property finders and the relocation agents they will normally have a good stream of high-value clients who need to be looked after. That’s when the service element really comes into its own – you must help them find the ideal property for their client.”

Has Covid and WFH changed the dynamics of your markets?

“It’s much more now about people wanting to live in an area where there’s the best local culture and social life because they may be spending more time working from home. So rather than choosing Mayfair where there are a lot of offices and fewer homes, they want locations within Chelsea and Notting Hill.”

Is the much-reported fraud in the prime rental market a problem you’ve faced?

“It’s almost a question I don’t want to answer because I’ll say we’ve been pretty lucky and not experienced this but then it’ll happen. I’ve been doing this job for 24 years and I’ve only had to go to court twice to sort out a rogue tenant.

“Covid did change things – and many tenants were worried about their incomes at the beginning of the pandemic. But we worked with the ones who had genuine difficulties including getting rent suspensions or releasing people early from tenancies and dealt with those who were just trying it on.

“There are some bad eggs out there – it’s an easy way to make a lot of money if you can secure a tenancy, stop paying the rent, sub-let or Airbnb the property all while refusing to move out. It’s why we pay so much attention to referencing and really go into granular detail about the documents and claims people offer up in their tenancy applications.”

“I think the big London estates are trying to grow their portfolios and even taking back some of the properties that they have disposed of in the past, but I think the individual investor at the moment is holding back given the tax situation.”

How do you let off steam?

“I got into Jiujitsu when a restaurant near my old employer was converted into a martial arts academy by a former world champion and so I had a look to see what they had done with the space – and it all started from there. It is a stressful job so it’s a great way to allay that stress and let off some steam. That was 12 years ago and now I’m a black belt.”

What’s your most memorable deal?

“I’m not being evasive and yes, we do have famous people we deal with, but there are just too many to remember – it’s why I’ve stuck with lettings for so long – every day and week there is another remarkable property, or landlord, or tenant to deal with.”

RUSSELL SIMPSON – IN A NUTSHELL

Founded in 1979 by Alan Russell who remains its managing director, the family-run company also features five of his family – Jake, Leo, Hermione, Bertie and Hattie and the family dog, Django but overall employs more than 20 people across its two locations. The firm, given its high-flying clients and the kind of property it sells and lets, has a high profile in the media and its senior staff are often quoted in The Times, Daily Mail, Evening Standard and Financial Times.

How estate agencies can truly differentiate from their competitors