Research by hybrid agent Nested has found that despite a housing market boom, an increase in the number of estate agents means there’s now tougher competition amongst those looking to list and sell homes across the nation when compared to last year.

Bristol has seen the biggest uplift, with 16% annual increase in the number of agents operating within the city, whilst Bournemouth (13%), Southampton (11%), Leeds (11%) and Sheffield (10%) have also seen an increase of more than 10%.

Just two cities have seen a decline in the number of agents, Portsmouth (-13%) and Aberdeen (-8%). So what does this mean for those working within the sector when it comes to the competition for available listings?

Despite seeing an annual drop of -2 listings per agent, Liverpool remains the most potentially lucrative market, with 39 properties listed on the market for every one estate agent. At the other end of the table, Cambridge is home to the fiercest level of competition, with just 12 properties listed for every one agent in the area. 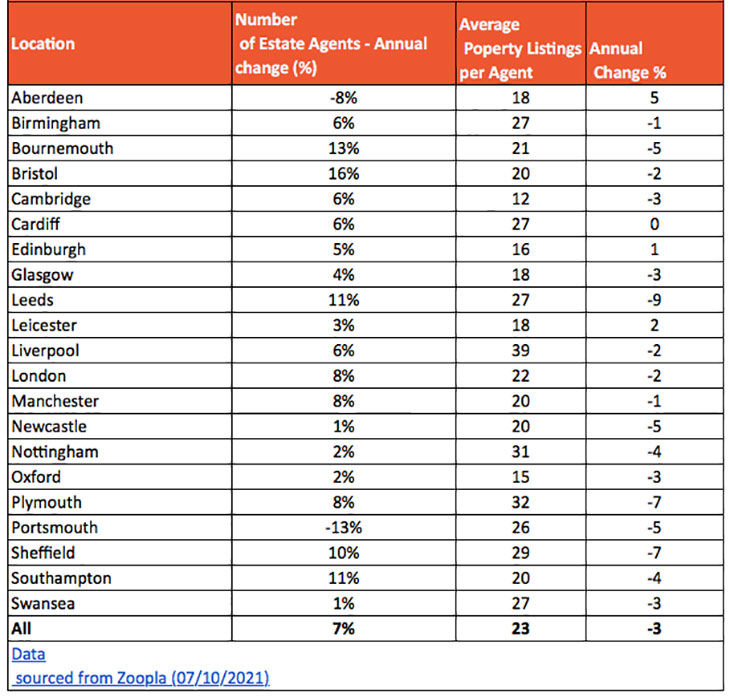 Head of Commercial at Nested, Alice Bullard, commented, “While the market has been running red hot pretty much since it reopened at the start of last year, the number of estate agents working to facilitate this heightened demand has also increased quite considerably.

“This means more competition and a lower number of homes per agent on average, which inevitably results in a drop in revenue for those who can’t differentiate themselves from the rest of the market. For those big brand names with a hefty wage bill and multiple branches to support, this could spell trouble, particularly in the cities that have seen the biggest increase in competition.

However, those that have made the choice to follow the self-employed route with the support of a trusted brand are far better placed to negotiate a more competitive marketplace.”