Thinking of changing your fleet? Pete Tullin suggests that electric could be the way to go to boost your local green image – and, of course, to save the planet. 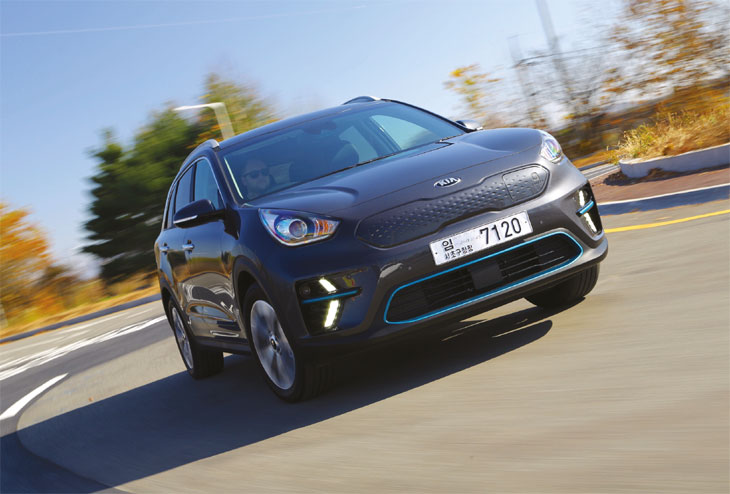 As a local well-known company with a very visible high street presence, your choice of fleet car says so much about you. And that needs to be a positive message about how you respect your town, neighbours and clients. Taxi firms sussed it a long time ago and now it’s time for agents to send the right message. So what do we need to know about electric cars before making the switch? Current government policy is to halve the number of non-electric cars on our roads by 2030 and end sales entirely by 2040, so what is a choice now, won’t be a choice in the future.

Does this mean petrol- and diesel- powered cars are destined to befall the same fate as the fossilised dinosaurs that power them? Quite possibly.

Whether they be self-generating hybrids, plug-in hybrids or fully electrified models, there’s no denying the switch to electric power is gathering pace at frenetic rate. So much so that some manufacturers are struggling to keep pace with demand.

The Kia E-Niro electric car which recently picked up the prestigious What Car ‘Car of the Year Award.’

Take the Korean brand Kia. It’s E-Niro electric model recently picked up the prestigious What Car? ‘Car of the Year’ award and within days of receiving the accolade the entire allocation of cars earmarked for the UK market for the whole of 2019 sold out.

So, what’s driving this spike in demand? 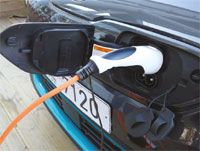 Well, as much as most of would like to think we’re socially responsible, and we certainly all have a vested interest in cleaning up the air we breathe, it’s more likely that cold, hard cash is driving us towards e-power. The passing of more stringent emissions laws, designed to reduce CO2 gases and nitrous oxide particulates is already having a significant impact, due to a more punitive benefit-in-kind (BIK) taxation regime and increased congestion zone levies. The London congestion charge is about to double to £24 per day for cars that don’t comply to the latest emissions requirements, for example. But while electric cars are exempt, a lowly BIK rate will have far greater benefits for a much wider audience.

Currently, the BIK rates for fully electric vehicles is calculated on 13 per cent of the car’s list price, and although that figure will rise to 16 per cent as we move into the 2019-2020 tax year, it is set to plummet to just two per cent in 2021

Another incentive to purchase a pure electric vehicle is the help-to-buy grant. Unlike plug-in hybrids, which recently lost their grant, pure electric cars still qualify, with the government paying up to £3,500 towards the purchase of an electric car.

As for running costs, as things stand, electric cars cost buttons compared to fossil-fuelled counterparts. That said, they demand a certain amount of forward planning to maximise their benefits.

Research suggests most plug-in owners charge their vehicles either overnight at home or while they are at work via a 7.2kw charging system and if you have an Economy Seven electricity meter it will typically cost around £3.64 to charge a battery to 80 per cent of its capacity. You can charge up using a domestic three-pin plug, but it takes forever to re-energise the battery this way.

This is one for the boss. The Jaguar i-Pace may look like a catwalk model, but it is a practical, spacious five seater – and it’s pretty posh inside too. It also looks and feels very sophisticated.

If, however, you have a wider patch, there are cost considerations around fuelling. If you need to stop at one of the growing numbers of fast charging points dotted around the UK, you could end up paying three times as much as a home charge, but usually, it will take less than an hour to charge your vehicle. Of course, this is based on current charging fees and you can pretty much guarantee, as electric vehicles become the norm, the Government will up the price of electricity to offset lost fuel duty revenues.

Another driving force behind the rush to electric power is the latest developments in battery capacity. Range anxiety has been a major factor in dissuading people from considering a fully electric vehicle and although it may be an irrational fear, especially when you consider most people’s average daily commute is less than 50 miles per day, it’s a fear, nonetheless.

Despite much positive messaging, the thought of being stranded at the roadside, however unlikely, remains an unpalatable scenario, not to mention an endorsable offence if you are judged to have set out on a motorway journey knowing that your range was on the sketchy side.

Equally, spending the fat-end of an hour sitting in a motorway service station waiting for your car to ‘fast-charge’ when all you want to do is get home, is still considered by many to be too much of an ordeal.

Home on the range

Thankfully, research has also revealed that when asked how many miles an electric car would need to be capable of to make it a viable daily business tool, most people came back with the rather fanciful figure of a 250-mile range. Well, that figure is no longer fanciful. The aforementioned Kia E-Niro is officially capable of 282 miles on a single charge and almost all the latest electric cars are set to benefit from increased battery capacity. It’s also true that even when the mercury plummets, which has a detrimental effect on battery powered cars, the stronger batteries will still achieve over 200 miles between charges.

If you’ve never driven or ridden in an electric car and imagine them to be about as illuminating as a ride on a kiddie’s carousel then you’ll be pleasantly surprised. As with all electric cars, Kia’s E-Niro delivers its maximum power from the start, so as soon as you plant your foot on the accelerator pedal you’re off like the proverbial scalded cat. With 204hp and 291ft-lb of torque tugging at the front tyres you can be blurring your way to 60mph in just 7.5 seconds. That’s actually quicker than that estate agent’s fave of yore, the legendary Peugeot 205 GTI.

There are no gears to concern yourself with either, just press and go and because the electric motor produces so much braking power as you come off the accelerator, you can easily meter out your braking distances well in advance and only use the brake pedal when unexpected stops are required.

With the battery pack mounted under the cabin floor, there’s plenty of interior space which creates an exceptionally low centre of gravity, which means the E-Niro feels well balanced and responsive when cornering.

Perhaps the best part of the deal is the ability to travel in near silence. With none of the mechanical under-bonnet clatter that you have to tolerate with an internal combustion car, the only interlopers of note are tyre and wind noise as speeds increase.

At £36,500 (£33,000 if you factor in the government grant) the E-Niro occupies the middle ground when it comes to electric motors but there are plenty of alternatives above and beyond that price point.

One for the boss 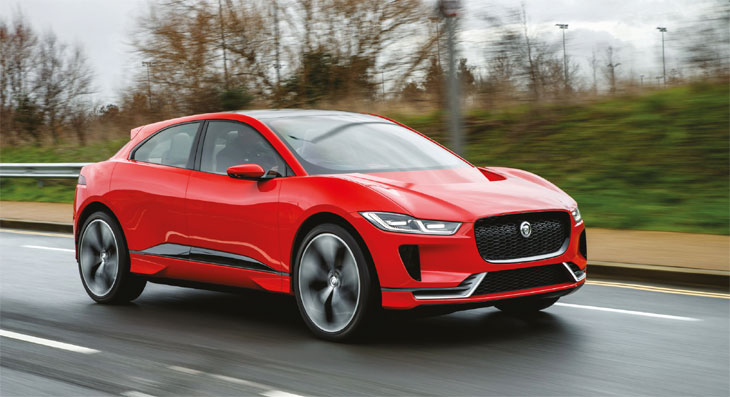 The Jaguar i-Pace may look like a catwalk model, but it is in fact, a practical, spacious, five-seater and it’s pretty posh inside, too. Along with a flash-looking dashboard and centre console that houses the drive select buttons, all the materials look and feel far more sophisticated than in any previous Jag.

Any talk of space and practicality pales into insignificance next to the way the thing drives, though.

Producing 400hp and 696Nm of seamless torque that’s delivered through all four-wheel wheels, it simply explodes from a standstill, hitting 60mph in just 4.5 seconds. Even so, what really sets it apart from a traditional supercar is what happens when you ask for an additional boost of overtaking power.

Instead of the usual pause as the gearbox downshifts, and the engine clears its throat, the i-Pace’s motors simply explode and spit 2.1 tons of aluminium and batteries at the horizon faster than you can lick your lips. 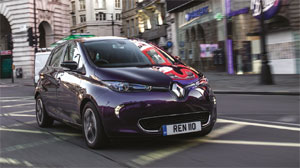 At the other end of the scale is the Renault Zoe. Its main strengths lie in the way it feels like a conventional, compact supermini that costs pennies to run. It’s easily capable of 150- miles on a full charge and the electric motor develops plenty of punch, there’s no danger of you being left at the traffic lights. Inside, it’s not the last word in luxury but there’s room to accommodate four people in reasonable comfort and it has a decent sized boot. 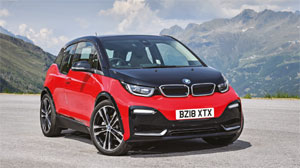 The BMW i3 cuts a dash on the high street as well as being a hoot to drive!

Another well-established contender is the BMW i3. Its striking looks inside and out and sporty driving characteristics mean it cuts a dash in the high street as well as being a hoot to drive. It’s unusual in that it has rear-wheel drive, but this frees up plenty of room under the bonnet for the steering to articulate, so it’s extremely manoeuvrable in town and perfectly suited to slipping into tight parking spots or whizzing up car park ramps. That enviable BMW image also ensures it will still be worth a great deal of its original value come resale time. 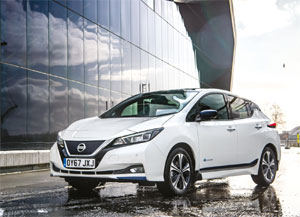 The Nissan Leaf is an absolute cracker!

No manufacturer has more experience of building electric cars than Nissan and its latest Leaf is an absolute cracker. It’s spacious, well-built and as well as a strong range, is stacked with loads of creature comforts. It also features the latest safety kit, including a semi-autonomous driving feature linked to cruise control, to steer and brake the car for you on the motorway, if you keep your hands on the steering wheel.

Nissan’s phone app also allows you to keep an eye on the battery’s status and can be used to calculate just how much you’ve forked out to charge it.

In terms of driving abilities, it’s a very smooth, comfortable car. The downside is it’s not the most engaging motor to drive. That said, it’s not without its wow factor. If you’re feeling frisky simply give the power button a jab and you’ll instantly summon up what can only be described as electrifying performance.

So there’s plenty to think about! What is clear though is that this is the way of the future, so if your fleet is ready for a switch, why not consider giving your agency that forward-thinking, caring image and switch to electric. How much is that Jag?