Aged 23, Steven Morgan went to the Middle East to work for Cluttons. 13 years later he heads their operations – worldwide. He tells Nigel Lewis his story.

There was a time during the noughties when many young estate agents upped sticks and went to the Middle East to make their fortunes. 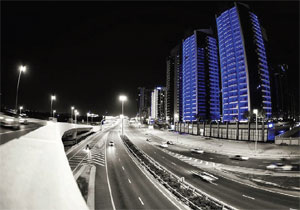 Or at least that’s what they thought they were doing… many crashed and burned in the region’s famously cut-throat property industry. Others though, did extraordinarily well.

One of those hopefuls back in 2003 was Steven Morgan, then a 23-year-old with just four years’ experience gained with DTZ in the UK and a strong desire to go east.

His first move was to join the Bahrain office of Cluttons but soon afterwards moved on to Dubai where within five years he was head of the office.

By 2009 he was head of Cluttons United Arab Emirates (UAE). After rising to be CEO of its Middle East operation in 2013, he has now been given the job of heading up the entire Cluttons worldwide operation.

It’s about working with developers in areas where people are likely to buy. It’s not just random dots on the map.

Because the company is a network of associate partner offices, he’s called Senior Partner, but in effect Steven is now, at the age of just 39, the CEO of this venerable institution, which began business in Sussex in 1765, making him the youngest Senior Partner in the company’s 250-year history.

“Cluttons tends to be a fairly conservative organisation so it’s unusual for someone my age to be given the job of heading up the business,” he says.

“I think that my fellow partners have understood the strength and benefits of our international business, and particularly our Middle East one.

“We now have close to 40 per cent of our turnover coming out of International, which is a huge change for a business which has until recently very much a Londonbased one.

“So it’s pretty forward thinking that they have brought someone young through, who understands those international markets to try and tie together the various bits of the business.”

Since Steven was made CEO of its Middle East operations in 2013 turnover within this part of Cluttons has risen by 76 per cent to £15m and he’s worked on some of Dubai’s largest construction projects.

“Cluttons is more than just residential agency, we’re fundamentally a full service chartered surveying business – where 60 per cent of our income comes from consultancy services,” he says.

“Before I arrived in Dubai there hadn’t really been an international estate agency market because as an expat you couldn’t buy property, so it was very much a local residential market for sales, and then a very strong letting sector for the expats coming to live and work in Dubai.”

That all changed in the early 2000s as Sheikh Mohammed identified free zone areas where foreigners could buy property and Cluttons made its name working with one of the region’s main construction companies, EMAAR, including selling properties into the UK.

“Middle East business is very different, including the speed and pace at which things happen and developments are built, the scale and the entrepreneurial spirit of working with the developers – and in the early days, the lack of regulation.”

“The level and scale of real estate that you get involved in here as a professional is something you’d only dream of in the UK.

“For example, recently we’ve been working with a developer in Dubai called TECOM and we’ve helped them with their first residential development from feasibility to master plan and pricing to the VIP launch – which is 440 villas. We’ve been working on for the past 18 months or so.

“It’s very sales based in the Middle East – so, for example, in the UK the agent who unearths the land for the developer and works with them on the planning application and helps unlock the value is the one who tends to stick to the instruction all the way through.

“In the Middle East it doesn’t really work like that because the land is either quasi-government owned anyway and made available to the developer or the land is pre-bought by the developer with specified development guidelines so it’s pretty cut and dry on the planning.”

Companies like Cluttons have been successful in the Middle East because of their track record in the UK, which has helped developers like EMAAR gain greater credibility.

“Our brand gives buyers confidence that the development is bona fide and they’re going to get delivered what is says on the tin,” says Steven.

BUSINESS IN THE SANDS OF TIME

Steven believes the future of Cluttons lies in capturing the flows of money as they switch around the world. For example, he says that historically London stock has been sold into the Far East but those markets aren’t quite as strong as they were.

“Developers are now focusing strongly on the Middle East. So we’ve been working with quite a few London developers there, helped by our strong local database and brand there as well as our teams in London to link up with the developers.

“It’s become clear over the last half a decade how money from certain parts of the world moves to other parts of the world. In Milton Keynes, for example, there is a high number of Kuwaiti-owned properties within certain projects – it’s very much about joining the dots up and adding to our armoury of offices.

“We have a business in Marbella and there’s a lot of interest from the Middle East in Marbella – those links work very well. So it’s all about working with developers in areas where people from other parts of the world are likely to buy. It’s not just about random dots on the map.”