Small developers are set to benefit from greater financial support from the Government, Housing Minister Brandon Lewis has revealed. 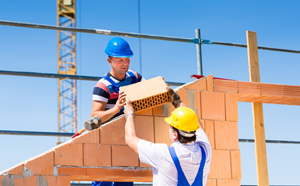 The Government has pledged to match the £50 million promised by Lloyds Banking Group in October to help increase the supply of needed new homes across the country, the Housing Minister Brandon Lewis (left) announced this week.

The Housing Growth Partnership will act as a dedicated initiative alongside small builders to invest in new developments, with the ultimate aim of increasing housing supply.

The latest house building data reveal that housing starts are now at a seven-year high and climbing, while the volume of homes granted planning consent has reached 261,000 – the highest since 2007.

But to help “maintain this momentum and keep the country building”, Lewis said that the Government recognised that greater investment in the sector is needed.

He commented, “The 2008 economic crash devastated our army of small builders, with delivery falling from 44,000 homes to just 18,000 – seven years on, companies are getting back on their feet but we’re determined to give them all the help they need.”

Lloyds Banking Group said that it welcomed the Government’s announcement of support for the housing growth partnership, which will double the capability to support SME house builders.

Andrew Bester, Group Director and Chief Executive, commercial banking at Lloyds Banking Group, said, “The challenge of housing supply and affordability is one of the biggest issues facing Britain today.”

“It [the funding] will provide SME house builders with much needed equity to support residential development projects, to stimulate growth in their businesses and facilitate access to conventional property development finance,” he added.

The Federation of Master Builders (FMB) estimate that the SME house building sector could deliver an additional 20,000 homes per year if their access to finance was improved, putting a significant dent in the UK’s housing supply requirements.

Ahead of this week’s Budget, the FMB has called on the Chancellor to improve access to finance for SME house builders, which have consistently cited this as their primary barrier to building more new homes.

Estimates by FMB members suggest that, output from SME house builders would increase by as much as 100 per cent if the loan to project value ratios on offer were improved to 80 per cent from a standard 60 per cent. Based on recent housing statistics, this could equate to almost 20,000 new homes being built, making a significant impact on the supply side gap in the UK housing market.

Brian Berry (left), Chief Executive of the Federation of Master Builders, said: “Conservative ministers have been incredibly successful in improving access to mortgage finance and reviving demand in the housing market, but access to finance for those in the business of supplying new homes has remained extremely difficult. There remains a reluctance by many banks to lend to SME house builders to help finance small housing developments.”

He added, “Given how far behind demand we are, this issue is just one part of a much wider solution. However, 20,000 homes is a significant number. SMEs clearly have a big part to play in solving the housing crisis, but they need a financial environment which empowers them as it has done in the past. Given that our members identified access to finance as the primary barrier they face when trying to build more new homes, this measure could do wonders to help our industry.”