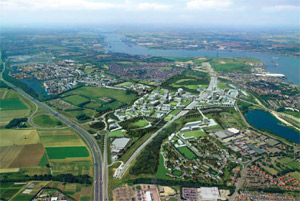 And did those feet in ancient times, walk upon England’s mountains green,” is the opening line from William Blake’s poem Jerusalem which is often considered to be the unofficial national anthem.

In the poem, Blake talks about England as a green and pleasant land, but, according to the Department of Communities and Local Government, only about 13 per cent of England is actually defined as greenbelt and that greenbelt is more than 30, 000 hectares smaller than it was ten years ago.

Some experts, including award-winning town planner David Rudlin, are now suggesting that more of the greenbelt is used to solve the country’s housing crisis. Mr Rudlin recommended extending 40 cities such as Oxford, Norwich and York by building homes around them – a sort of garden city extension. His ideas have been well received, at the end of last year Mr Rudlin was awarded the Wolfson Economic Prize worth £250,000.

Ebbsfleet – set to be the next garden city, with space, grass and water.”

The Conservatives, Labour and the Liberal Democrats supported the creation of three new garden cities in March last year to address the nation’s housing shortage. Last year the Coalition Government announced that Ebbsfleet would be the first garden city to be built in a hundred years, 15,000 new homes would be built – but the Government gave no timetable for delivery. The Chancellor, George Osborne, says the area was picked because of existing infrastructure and high-speed railway line.

Since that announcement, other locations for garden cities have been announced including Bicester in Oxfordshire, where 13,000 new homes are to be constructed. The district council is delighted with the plan, which provides £100million for homes, roads, parks and public amenities, but there is much local opposition. The Campaign to Protect Rural England (CPRE) is demanding more public engagement with the plans to protect the landscape and villages.

The Chief Secretary to the Treasury Danny Alexander says he’s committed to building 55,000 new homes a year until 2020 but that doesn’t appear to be nearly enough to meet demand. One  think tank, Future Spaces Foundation, claims 67 garden cities each with a population of 30,000 are needed to meet a projected shortage of one million homes in London and the home counties alone over the next 25 years. The group stated that, “if used as the sole solution to the current housing shortage, garden cities would require… an area bigger than Manchester or 6.8 per cent of of the unprotected and unbuilt land within a 50 mile radius of London.” An intensification of the density of existing settlements rather than construction of “unsuitable and damaging” garden cities is strongly recommended.

According to the government’s own figures around 240,000 homes need to be built every year until 2032 at least to match the number of household formations. Last year, just over 120,000 were built so the gap continues to widen.

We need to see spades in the ground at the garden city locations and complementary infrastructure in place so that communities can be created.

The developer of the Ebbsfleet site, Land Securities, says it plans to build villages of a few thousand homes each, with safe areas for children and plenty of greenery. The principles are rooted in the garden city ideal first created by Ebenezer Howard in the late 19th century. Letchworth was the UK’s first garden city. A planned place to live where communities were surrounded by parks and
boulevards and Letchworth Garden City was followed by the equally successful Welwyn Garden City.

Until more homes are built demand will remain high. Buyers are now seeking better value for money. The market is slowing down, even in London. This year prices are only expected to rise by about 5 per cent. But 2016 should be busier, so like Blake’s poem – which isn’t about England at all but is used as a metaphor for human identity – the decision to build more garden cities may
not simply be about the need to increase the supply of homes, it may instead reveal that the main political parties are jostling for position just before the election on an issue that is crucial to this country.

Jeremy Leaf is a chartered surveyor and estate agent.