Sign in or Sign up
The essential site for residential agents
Home » Features » High Speed 2:
next
Regulation & Law 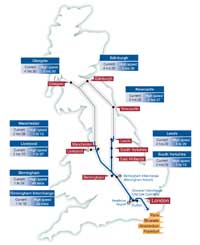 Journey time savings to and from London by train.

The Government is believed to be about to give the final go-ahead for the HS2 London to Birmingham rail link despite strong objections from environmental groups and residents along the extensive route. Estate agents are already asking for legal help for affected clients up and down the country – the next step is to look at compensation for them.

With Transport Secretary Justine Greening about to announce the official launch of High Speed 2, it appears as if the scheme has reached the point of no return.

The Government says the plan to link London to Birmingham with a train service that can cover the distance in 49 minutes, and then branch on to Manchester and Leeds, will help bridge the north-south divide and bring economic benefits to the UK. The problem is that these benefits are not along the way that the route goes.

Those against the scheme complain of wasted money, environmental damage and the blight to land and property along the route. In private many admit that their real gripe is that they are not going to be fairly treated.

In June and July this year, the Department of Transport was engaged in a very detailed public consultation programme, and we attended quite a number of these events.

There was a marked contrast between the roadshow at Euston where very few members of the public turned up and those in the countryside, especially in Buckinghamshire, where there were regiments of objectors.

What’s noticeable about public works schemes, is that whatever the Government says, the reflex is for people to object to them. What should be borne in mind, however, is that the compensation systems work, and work well, if you approach them in the right way. The Compulsory Purchase Compensation System does what it says: it provides compensation for compulsorily bought land which is either directly to be used for the scheme or project or is blighted by it.

The people in real difficulty are those close to the scheme, but whose land is not taken or designated as blighted and may see their property devalued at least for the period in which construction is taking place.

For those who have a good reason to move, either through work commitments, or because of their health, for example someone who needs to move into sheltered accommodation, there is the Statutory Hardship Claim scheme.

This has worked well for some people, and the Government has been operating an ex-gratia hardship scheme which in many cases is more generous than the statutory scheme.

I believe a key message for the Government is that they need to make it clear how fair the arrangements actually are. The messages being put out around HS2 is that you must accept it because it’s for the good of the country, and that any compensation you get will be the least amount possible. The atmosphere of some of these roadshows has been incredibly hostile to HS2, and because of this they probably generated more objections than they put to rest. There is a real public relations problem, not least in the discouraging and disobliging demeanour of the HS2 Ltd staff on the  stands at the roadshows! The reality is that these types of schemes will go ahead if there is a public interest in them doing so, but also that if individuals are properly represented and competently advised you will be treated fairly or even generously.

Solicitors who are members of the Compulsory Purchase Association know the ropes, and tend to know their opponents too. The message for the public is that people should not be afraid of public works schemes as long as they pursue compensation claims in the right way using competent advisers.