Sign in or Sign up
The essential site for residential agents
Home » Features » How does your garden grow?
previous next
Housing Market

By moving out of the city, says Kate Faulkner of Designs on Property, as the need for more space shows in the indices. 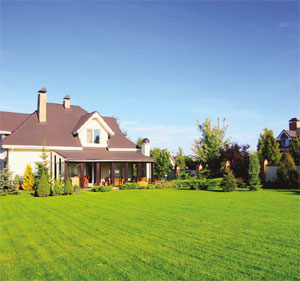 Hometrack “Time to sell falls by a quarter as homeowners shrug off recession fears.”

Kate says: With much talk of a ‘mini boom’ in the housing market, it’s important to put this into context. To do this, we focus on the annual average since 2005, which includes one boom and a bust to understand how the current year on year property price changes are performing versus the past. What this shows is that house price inflation is slightly up year on year versus the long run average of 3.5% growth each year for asking prices from Rightmove which are currently recording a 4.6% rise.

With much talk of a ‘mini boom’ in the housing market, it’s important to put this into context.

We don’t tend to set too much stall by Halifax’s data as we know that since the last crash their on-going data is quite erratic. For LSL and UK HPI, they haven’t yet quite caught up with the latest data, so aren’t showing the increases we see in the others; it’s why yoy stats lag behind.

Rightmove “Prices usually fall at this time of year, as sellers try to tempt holiday distracted buyers, with the national average monthly fall for the last ten years being 1.2%. While there is a slight monthly fall of 0.2% (-£768), this is due to London’s more normal seasonal fall of 2.0%, reversing what would otherwise have been an unseasonal national rise.”

RICS “The August survey feedback points to a sharp acceleration in house price inflation over the month. At the national level, +44% of respondents reported an increase in prices, the strongest reading since 2016. For properties listed at below £500k, 78% of respondents now report that sales prices are coming in at least level with the asking price. Interestingly, this is much higher than the 63% of survey participants seeing this back in January. Furthermore, when looking at properties marketed at between £500k and £1million, 34% of respondents are seeing sales prices come in below asking, significantly down on 48% reporting this discrepancy at the start of the year.”

Nationwide “UK house prices rose by 2.0% in August, after taking account of seasonal effects, following a 1.8% rise in July. This is the highest monthly rise since February 2004 (2.7%). As a result, annual house price growth accelerated to 3.7%, from 1.5% last month. House prices have now reversed the losses recorded in May and June and are at a new all-time high. The bounce-back in prices reflects the unexpectedly rapid recovery in housing market activity since the easing of lockdown restrictions. Pent-up demand is coming through. Behavioural shifts may also be boosting activity. 15% of people we surveyed were considering moving as a result of lockdown.”

Halifax “House prices continued to beat expectations in August, with prices again rising sharply, up by 1.6% on a monthly basis. Annual growth now stands at 5.2%, its strongest level since late 2016, with the average price of a property tipping over £245,000 for the first time on record. Notwithstanding the positive factors supporting the market in the short-term, it remains unlikely that this level of price inflation will be sustained. Rising house prices contrast with the adverse impact of the pandemic on household earnings and with most economic commentators believing that unemployment will continue to rise, we do expect greater downward pressure on prices in the medium-term.”

Hometrack “The strength of demand and sales is supporting the headline rate of UK house price inflation which slowed to +2.5% in July from +2.7% in June. The 3-month growth rate peaked at +1.1% in April on sales agreed before the lockdown and has now almost halved to +0.6%.”

Kate says: The regional data comparison for each of the indices below shows some similar trends with Yorkshire and Scotland topping the year on changes for Rightmove’s asking prices and home.co.uk shows a similar trend, adding the North West as a growing area. Although these are asking prices rather than price paid, it’s likely that only slightly lower rises will be recorded when the final price is agreed. 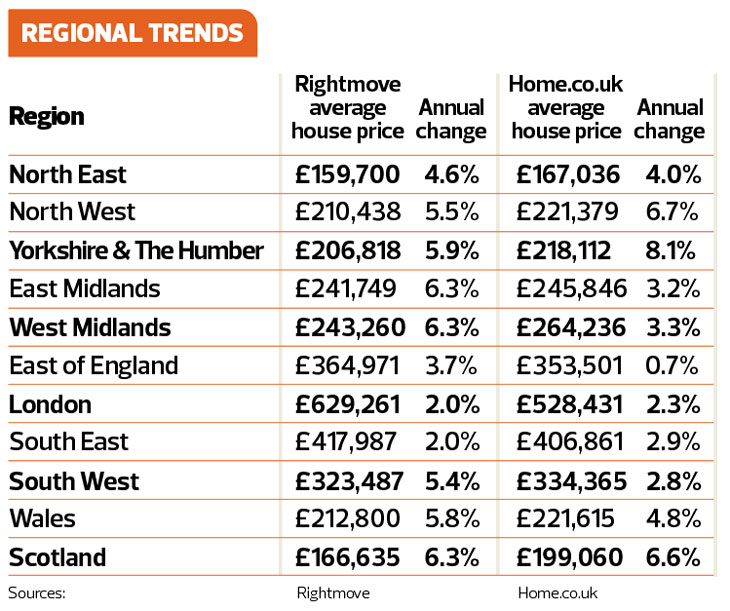 Kate says: The property market statistics are astounding at the moment. From an industry perspective, property transactions have performed at a level none of us could have dreamed of during lockdown. Demand and supply however is very individual as the home.co.uk and RICS surveys show, with some regions seeing plenty of new stock come onto the market, other areas such as the North, not so much.

Then there is the flat versus houses measures. Interestingly, flat price inflation hasn’t been as high in many areas since 2007, it’s mostly houses that drive the positive measures. A clear impact of Covid is people’s desire to live in houses has increased even more, with some excellent insight provided by Hometrack of the lack of supply versus demand for three bed houses.

Moving forward, planners and developers are going to have to re-think what people’s needs are post Covid and how best to design homes and new build estates. And for some areas, typically not seen in the past as ‘commutable’ on a daily basis, we may see them becoming more attractive to the new breed of ‘part time’ commuters.

Rightmove “The number of monthly sales agreed is the highest that we have ever measured since we started tracking this figure ten years ago, up by 38% on the prior year, and a massive 20% higher than the previous record set in March 2017. The increase in activity is not just a result of the stamp duty holiday, as sales agreed are up across all sectors of the market. They’re up 29% in the first-time buyer sector, 38% in the second stepper sector and 59% for larger, top of the ladder homes. Momentum is still building.”

RICS “The pandemic is expected to cause a lasting shift in the desirability of certain property characteristics, as 83% of respondents anticipate demand increasing for homes with gardens over the next two years. On the same basis, -62% and -75% expect demand to decline for homes located in highly urban areas and tower blocks respectively. Given the strong sales activity of recent months, the average number of homes currently held on estate agents’ books remains relatively low in a historical context, at 42 properties.”

Hometrack “The post lockdown rebound in the housing market shows little signs of slowing. The cumulative increase in buyer demand since the start of the year is +34% higher than over the same period in 2019. Over the last month the flow of new supply has been 50% faster than last year but the closure of the market means available inventory per agent remains 3% lower than a year ago. The supply/demand gap is slowly closing. Homes are currently selling in less than a month across all regions and countries. Three-bed houses remain the fastest selling properties with an average time to sell of just 24 days.”

Zoopla “Zoopla’s tracking of supply and demand shows the greatest mis-match is for 3 bed houses. These are the most in-demand property type, but the proportion of available supply falls short of demand across all parts of the UK. At a regional level there has been noticeable jump in demand for 3 beds in London and the South East of England as households seek out more space. In the West Midlands 60% of all applicant demand is for 3 bed houses. Changing buyer requirements has resulted in the time to sell 4 and 5 bed houses falling by over a third compared to last year. Four bed houses are now selling faster than the average flat.”

Knight Frank “UK exchanges were 69% higher than the five-year average in the week ending 29th August. Outside of London, the equivalent increase was 60%, and the weekly total was the biggest since December 2018. In the Capital, where the housing market has taken longer to gain momentum since restrictions were lifted, the rise was 94%. The seasonal slowdown that normally takes place in July and August has not happened this year. The number of exchanges across the UK in the week ending 29th August was the 15th highest on [20-year] record.” 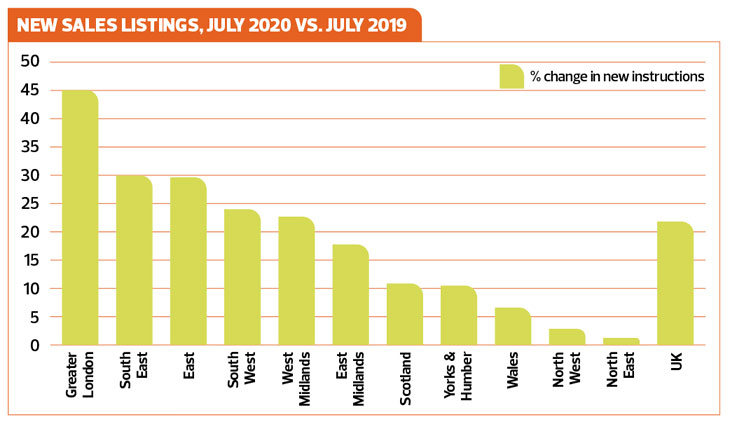 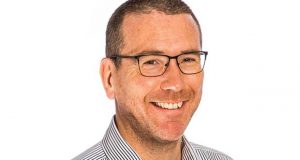