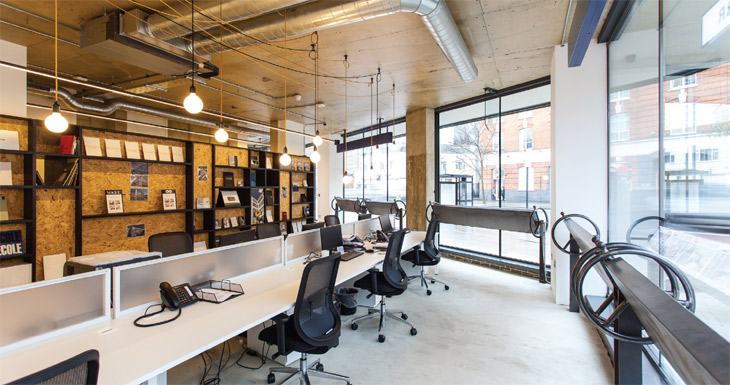 Hurford Salvi Carr wanted to make a bold arrival in City Road – a high profile address set between Old Street and Angel in the heart of London’s financial distract. Rather than rely on a safe, cosy design, the estate agency employed the renowned architect Danny Shafrir and refurbishment specialist MPL Interiors to create an interior scheme like no other.

The finished product is breathtaking, with an industrial flavour that brings to mind the work of Richard Rogers (the architect behind the Lloyd’s Building) and the Bowellism architectural movement, where a building’s workings are clearly on display.

A close partnership between MPL Interiors and Danny Shafrir ensured that the radical ideas were brought to life, including what is probably the most novel estate agency window display in town. MPL Interiors created a set of moveable property display units, taking inspiration from old mangles. The design team used untreated steel and LED light panels for the floor mounted designs, where each handle can be turned to alter the angle of the display panel. Continuing the mangle theme, MPL Interiors also created a ceiling mounted LED lit A1 display pocket in untreated steel, to display posters and marketing messages in keeping with the industrial theme.

MPL’s lead designer, Amanda McKenna, said, “Danny Shafrir’s idea for the City Road office was clear – an urban and industrial flavour – so it was exciting for us to help bring the vision to life. I am not sure we will ever repeat the mangle-style property displays again as it suits that office and the location perfectly. All credit has to go to our craftsmen, who created the working units from scratch with no other examples to follow.”

The other dramatic aspects are a nine-screen media wall, a very important aspect of the design as the corner office features large expanses of glass with minimal property displays, so the media wall is one of the primary ways for Hurford Salvi Carr to communicate with clients and display properties – whether that’s during opening hours or after close of business. “The media wall can run 24/7,” adds Amanda, “and it’s particularly effective after dark when the eye is naturally drawn to anything animated and illuminated.”

“Everything in the design is pared back and understated,” adds Amanda. “The windows needed to be kept as clutter free as possible and with floor to ceiling glass, the best way to do this was with a ceiling-mounted sign.

“The map is the only concession to aesthetic decoration but it helps personalise the office and also provides a degree of privacy at a point in the interior where there is a client meeting space.”

Unusual quirks also include exposed pipework, untreated plaster walls, a breezeblock reception desk and chipboard shelving units that have been backed with chipboard.