Lettings agent who spent many years working at leading firm reveals what it's like to be gay inside the industry.

Estate agencies still have a long way to go before LGBT staff feel it’s safe to reveal their sexuality, a leading former agent now working in proptech has said. 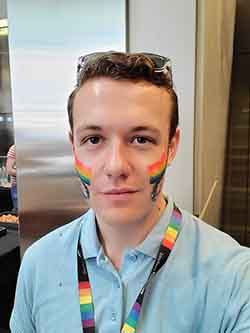 He says the ‘lad culture’ and inappropriate comments about gay people at some of these agencies meant he had to hide his sexuality before landing a job at an LGBT friendly employer.

“In my home country of South Africa it was normal to be out,” he says. “But arriving in London and beginning work at one estate agency pushed me back into the closet.

“Many of the people were very white, male and straight or at least that’s the way they portrayed themselves.

“The culture of making jokes – ‘oh that’s so gay’ type of thing made me, within the first day of arriving, decide not to reveal my sexuality, and also a manager made inappropriate remarks about ‘how gay’ a colleague was.

“I had to be careful about how I spoke about my personal life – and keep it general and high level. It wasn’t very LGBT friendly. It’s why I left that company.”

Wood says he finally found a more accepting culture at JLL. He says the company was proactive in promoting an internal culture of making LGBT colleagues feel comfortable and confident enough to speak up if necessary.

“But although I headed up several initiatives within the company including getting it into the Stonewall Top 100 employers list which is compiled from the Workplace Equality Index, I was aware that the prejudice was still there and the unwanted comments were still being thrown around the office.

“They didn’t stop to think that some of their colleagues might be closet LGBT, which only reinforced an atmosphere where they didn’t want to come out.”

Wood says that, to create change, LGBT staff need allies within the workplace who are willing to stand up and call out bad behaviour.

“By not calling out stupid remarks, you’re contributing to the problem yourself,” he says.

“Until we all start doing that, we’re going to lag behind the rest of society.”