As the ‘Pandora Papers’ exposed the ‘For Sale’ sign hanging over the UK’s property market, estate agents are urged to up their compliance game. 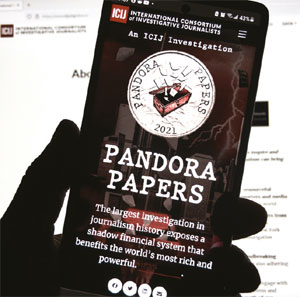 The Pandora Papers – almost 12 million documents exposing the secret dealings and hidden assets of the world’s richest and most powerful – has revealed that the UK property market is being abused to the tune of billions of pounds by people looking to hide their wealth, avoid tax and launder money.

The data leak has exposed millions of dodgy dealings by some of the most influential and wealthy people in the world, including corruption, and bribes, but sadly, one of the stand-out discoveries is that the UK property market is very much at the centre of tax avoidance and money laundering activities throughout the globe, with the Pandora Papers revealing that more than £4bn worth of UK property has been bought by offshore accounts.

Why is the UK’s property market such a target for money launderers?

While the Pandora Papers suggest that £4bn worth of property has been bought anonymously, the real figure is thought to be closer to £170bn, although of course, there is no way of really knowing the true scale due to the inherently clandestine nature of the problem.

The reason why UK property can be used to hide wealth, hide the real owners and launder money is simple – offshore companies in tax havens can buy UK property. And while owning UK property through an offshore firm is not illegal in itself, it enables the ‘Ultimate Beneficial Owner’ (UBO) to remain anonymous, which hugely heightens the risk of money laundering.

Estate agents can find it very difficult to actually establish the identity of the UBO.

This basically means that someone who has gained their wealth through illicit means can then set up an anonymous shell company in an offshore tax haven, transfer its dirty money into that shell company, and then buy a UK property through that company. They then have a property in the UK which they can live in, rent out – and charge rent, which legitimatises the cash – or sell it on to a UK citizen who, by paying clean money for the property, has then inadvertently helped launder the original dirty cash.

Plus, if you buy a UK property through a shell company, you don’t need to pay Stamp Duty, making it a highly attractive way for the wealthy to invest their cash – dirty or otherwise – which, in the words of Labour MP Margaret Hodge effectively means there is “a huge for sale sign hanging over Britain… it doesn’t care who you are and doesn’t mind where your money comes from.”

What can be done?

The obvious solution is to create more transparency around the actual owners of these properties. If they had to declare their interest, they would not be able to hide behind dozens of corporate layers as is currently the case.

This would mean estate agents and others involved in the industry would be able to identify any suspect transactions before they happen, and prevent UK property being used to hide wealth, avoid tax and launder money.

It seems that five years on, despite new rules and regulations, the risk of money-laundering through the purchase of UK property remains high. John Dobson CEO, SmartSearch.

Sounds simple enough. The trouble is, we have been here before. Back in 2016, the Panama Papers leaked 11.5million confidential documents exposing a network of more than 214,000 tax havens involving people and entities from 200 different nations, while in 2017, the Paradise Papers uncovered a set of 13.4 million documents revealing similar controversies. In response, governments and legislators across the world vowed to take action, but in practice, very little has changed, particularly in the UK, as John Dobson, CEO at anti-money laundering specialists SmartSearch, explains:

“When the Panama Papers were leaked in 2016, the lack of transparency surrounding shell companies was brought to the fore. They revealed the multitude of ways that shell companies and other corporate vehicles were being used by the rich and powerful to hide the ownership of a legal entity for a whole host of reasons, including tax evasion and money laundering.

“In response, the global regulatory landscape underwent significant reform to strengthen and enhance the beneficial ownership requirements. This included the 4th European Money Laundering Directive in 2017, which introduced mandatory UBO registers, and then in 2018, following the subsequent Paradise Papers scandal, the UK government published draft legislation* about setting up a ‘register of overseas entities’, to include ‘information about their beneficial owners’.

“But sadly, it seems that five years on, despite new rules and regulations, the risk of money-laundering through the purchase of UK property remains high.”

Transparency International, the UK’s leading independent anti-corruption organisation says the Pandora Papers should be a huge wake-up call to the Government who, despite being made well-aware of the UK property industry’s vulnerability to money laundering, and drafting legislation to strengthen Britain’s defences, have still done very little to actually tackle the problem.

“It’s been five years since the UK government committed to shining a light on who owns UK property via secretive offshore companies, yet this reform is yet to move beyond a draft bill,” said Steve Goodrich, lead researcher at Transparency International UK. “Although the UK talks a good talk on tackling illicit finance, these words ring hollow without delivering action.”

Duncan Hames, Director of Policy added, “These revelations should act as a wakeup call for the Government and regulators to deliver on much-needed and long-overdue measures to strengthen Britain’s defences against dirty money. If ministers are serious about tackling the flow of corrupt and criminal wealth into the property market, we see no reason why this could not be tabled before Christmas.”

What can estate agents do now?

While the UK may not have actually passed legislation on UBOs, there are tools out there to help estate agents identify exactly who they are working with.

Under EU law, which has been transposed into UK law, estate agents – and all regulated businesses – must run full anti-money laundering checks on corporates as well as individuals when onboarding new customers.

If it is a business customer, which would include an offshore shell company, this will involve verifying the corporate structure and identifying the owners and shareholders within that business. Once these are identified, individual checks should be run to ascertain the level of risk involving screening against Sanctions and PEPs, which would alert the agent if the UBO were say, a political figure, well-known business person or celebrity, as well as if they have been associated with any criminal dealings in the past.

Dobson says that, for those working in the property purchase chain, offshore buyers should always raise a red flag. He said, “While it is legal to own property through an offshore firm, it is key to identify who is actually providing the funds, because it is possible for individuals to use a myriad of layering techniques to hide who they really are. And the only reasons why they want to remain anonymous is if, at best, they are doing something immoral, or at worse, something illegal.”

Dobson continued, “However, even estate agents with the best will in the world can find it very difficult to actually establish the identity of the UBO. These people hire the best accountants, advisers and legal teams in the world to hide their money and their identities, meaning estate agents often find themselves lost in a labyrinth of multiple business names which have shares in the corporation.

“Our electronic verification system cuts through the corporate fog to get a clear picture of the ultimate beneficial owner quickly.” SmartSearch’s innovative UBO checks can enable estate agents to have greater clarity about the ownership of corporate entities they wish to do business with. At the click of a button, users can quickly and efficiently understand the ownership structure of a company and identify any individual with 10 per cent or more of the share value.

Once the UBO has been identified, SmartSearch uses credit checks and facial recognition techniques to identify and verify that UBO, screening them against global sanctions and PEP lists as well as adverse media, to ascertain whether they, or any of their associates, are involved in, or have been in the past, illicit activities.

Consumer choice should be at the heart of every transaction