Sign in or Sign up
The essential site for residential agents
Home » News » Agencies & People » Profits come to a standstill within Savills’ UK business, its latest results reveal
previous next
Agencies & People

Profits come to a standstill within Savills’ UK business, its latest results reveal

The £1.76 billion global company says political uncertainty is impacting its operations all over the world and has warned of a bumpy ride during 2019.

Savills has released its preliminary results for 2018 revealing an increase in revenues for its UK residential operation of 2% to £131.5 million, created mainly by gaining market share off competitors in “challenging conditions”.

But profits within the overall UK business have come to a standstill compared to the first six months of 2018, when it reported an increase of 17%.

Its UK business has been spending hard, including the purchase of Broadgate Estates’ lettings portfolio from British Land, a property agency in Guernsey called Martel Maides, Currell in East London and Porta, a planning and development consultancy. It also invested £20 million in Yopa last year through its tech investment arm.

The agency also reveals that transactions for homes worth more than £15 million increased by 43% year-on-year, although this has to be taken with a pinch of salt given the tiny numbers involved.

Commenting on its overall global performance, recently-appointed CEO Mark Ridley (below) says: “We have made a solid start to 2019; however, the year ahead is overshadowed by macro-economic and political uncertainties across the world. 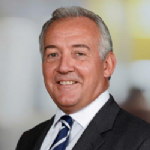 “It is difficult accurately to predict the impact of these issues on corporate expansionary activity and investor demand for real estate.

“At this stage, we expect to see declines in transaction volumes in a number of markets and growth in our less transactional business lines; accordingly we retain our expectations for the Group’s performance in 2019.”