Sign in or Sign up
The essential site for residential agents
Home » Features » Slowing, slowly
previous next
Housing Market

Approaching year-end, the leading indices continued to report rising prices, but the pace is weakening, says Kate Faulkner of Designs on Property. 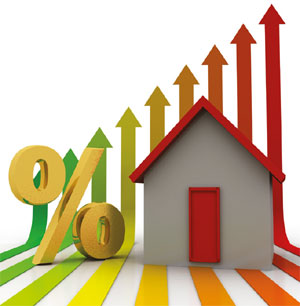 “The price of property coming to market drops by an average of 0.6% compared to last month, the largest monthly fall since January.”

House price growth edges back into double digits in November

“Annual house price growth remained strong in November at 10.0%, marginally higher than the 9.9% recorded in October. Prices rose 0.9% in month-on-month terms, after taking account of seasonal effects. As a result, house prices are now almost 15% above the level prevailing in March last year when the pandemic struck the UK.”

“UK house prices rose again in November, with the value of the average property increasing by another 1%, tipping the annual rate of inflation up to 8.2%. This is the fifth straight month that average house prices have risen, with typical values up by almost £13,000 since June, and more than £20,000 since this time last year.”

Prices continue to climb, but at a slowing pace

“The average price of all completed sales funded by both mortgages and cash grew at an annual rate of 4.1% in October. This is just 0.2% lower than the rate of 4.3% recorded in September, but is a significant reduction of 4.0% from the 8.1% growth in prices seen in June.”

Kate says: So far in 2021, we’ve seen one of the most active property markets from a transaction and price perspective, with sales expecting to reach 1.5m and prices still rising. All this when many predicted the market would ‘fall off a cliff’ post the SDLT holiday ending.

2022 will be an incredibly helpful year in knowing whether buyers’ and sellers’ behaviour has changed. Rather than try to time the market, ‘hoping’ for a fall – reasons previously given were Brexit, the election, then the pandemic – but despite everything thrown at it, the property market has continued to rise, bar some areas, so I think people may now just realise the best time to buy is when it suits them and they find a property they love, or can at least afford.

The property market is affordable, just not affordable for all those who want to buy.

However, 2021 may still throw up another behaviour change, will, based on Rightmove’s statistic, “The number of people browsing properties on Rightmove during the post-Christmas Day festive period has been increasing every year, with visits on Boxing Day last year 54% higher than the previous year” encourage sellers to get their property on the market before Xmas rather than wait for January?

Meanwhile, most of the price indices report rises from 4% (e.surv) through the Land Registry’s 11.8%, apart from Rightmove which has the usual December ‘lull’. The fact that prices are still rising is incredible, especially when they saw such a big jump last year. But it shows that rather than property being ‘unaffordable’ as is often quoted in the press, the reality is very different – the property market is affordable, sadly it’s just not affordable for all those that want to buy and that’s a very different story!

Regional property price reports show the ‘Northern Powerhouse’ to be the ‘winner’ in September, according to the Land Registry. Although prices are showing as up by 16.8% for the North West, it’s important to cross check these figures with the Hometrack/Zoopla data which shows Manchester is up by 5.8%, so nowhere near as high, suggesting the double-digit rises are over exaggerating the actual price increase, but still pretty healthy!

Apart from the North East, all regions since 2005 are now matching or exceeding inflation. Good news for the 50%+ people that own property with cash, up until the last year, many had actually lost money without realising it on their property.

And, the Government’s restrictions on mortgage finance do appear to be holding back London prices with growth of only 2.8%, when normally London would lead the house price charge.

Having said that, both the South West and East are doing well, perhaps due to price growth being artificially high as it’s mostly expensive houses driving this growth. Again, cross checking with Hometrack, key cities such as Cambridge are only tracking at 4.4% growth with Bristol at 6.1%, and Portsmouth and Bournemouth rising at 7% and 7.7% respectively.

However, some good news for those worried about rising prices from Hometrack: “In a sign that growth is easing across the country, quarterly price growth has also dipped compared to the late summer in all regions”. As you can see from their chart below, they are recording much lower rises than any other index due to their price changes taking into account the different transaction mix throughout the pandemic. 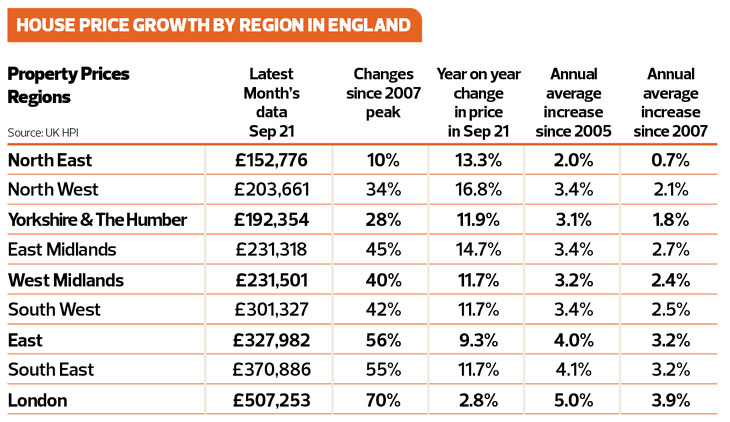 Kate says: The Hometrack data shows us just how many homes have changed hands this year – rising from 1:20 to 1:16 being sold. However, with demand remaining high, we really need stock to catch up if property prices are ever to stop rising.

Interestingly, they do highlight how much transactions feed into house prices, with houses for sale being down by 50% and flats by 15% (five-year average), hence why flat prices are appearing to be a lot more ‘flat’ (sorry!) than house prices!

“One in 16 privately owned homes has changed hands this year, compared to one in 20 in 2019. Buyer demand remains higher than usual levels – continuing to run +28% higher than the five-year average.

“The new supply of homes being listed for sale has been running 5% to 10% below typical levels seen in 2017-2019 for most of this year. However, the total stock of homes for sale is down more than 40% on the five-year average.

“When we look at the data in more detail, the trends on stock starts to diverge between houses and flats. The number of houses available for sale is down more than 50% compared to the average levels over the last five years. The stock of flats for sale is also down, but by a more moderate 15% compared to the five-year average.”

“At the headline level, 10% more of our contributors noted an improvement in new buyer enquiries over the latest survey period. This is up from a reading of just 1% previously and signals the first outright rise in buyer demand (albeit modest) since June 2021. Although buyer enquiries picked up, this has yet to translate into an upturn in sales. Nationally, 9% less of respondents reported a reduction in agreed sales during October.

“The depressed flow of new instructions being listed on the market of late remains widely referenced as a factor holding back activity. Indeed, the new instructions series has now been stuck in negative territory for seven months in succession. Given this, average stock levels on estate agents’ books have fallen from close to 42 properties in March to just 37 according to the latest feedback.” 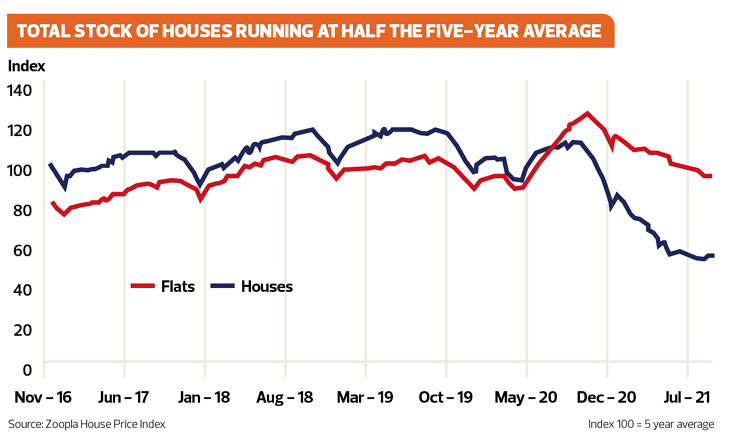 Postcodes – hot or not? 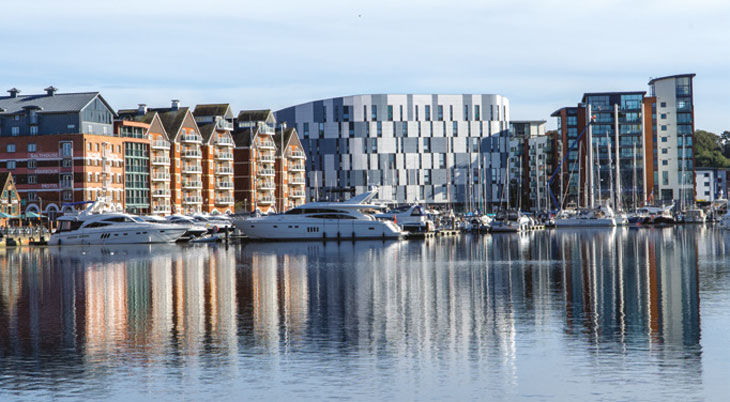 The Advisory tracks current market conditions so buyers and sellers can gain an independent view of how easy it would be to buy and sell their home in their area. This makes it easier for good agents that are honest about market conditions to value and manage expectations. For example, in IP5 (Ipswich) 92% of the properties on the market are under offer and EC2 in London is one of the worst performers according to this index, showing that ‘average property prices’ can mislead buyers and sellers.

In Ipswich, 92 per cent of the properties on the market are under offer.

From PropCast’s perspective, the hot markets at postcode level don’t necessarily track the overall increases and decreases seen even at town and city levels, with Ipswich, Dronfield and Bristol having some of the busiest markets, and London and L1/2 Liverpool having some of the slower ones.

To find out what’s happening in your postcode at:
https://www.theadvisory.co.uk/propcast/ 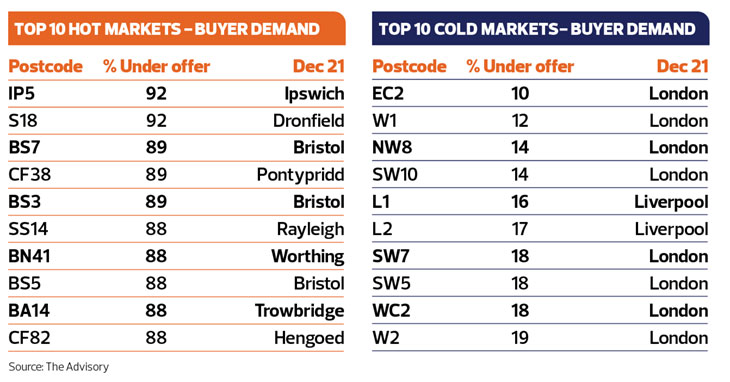 The Advisory shows that ‘average data’ for towns and cities really isn’t good enough for those looking at individual properties. Liverpool has topped the year-on-year price growth over the last few months, but as their data shows, anyone in L1 and L2 ie the city centre, will be seeing a very different picture. Meanwhile, although Bristol isn’t topping the charts, for those in BS7 – Bristol – this is one of the top performing postcodes along with nearby Easton.