Sign in or Sign up
The essential site for residential agents
Home » News » Agencies & People » Xmas video: Agency staff ‘sign’ up to be in Wizzard charity video
previous next
Agencies & People

Xmas video: Agency staff ‘sign’ up to be in Wizzard charity video 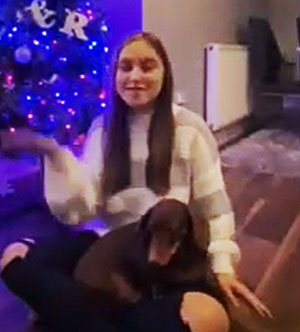 Set to the music of Wizzard’s 1973 hit I Wish it Could be Christmas Every Day, it features agency director James Sutton’s daughter Caitlin (right)and 17 staff each taking turns in front of the camera.

This includes Greg Young, the Managing Director of LSLi, the parent company of Intercounty.

But as ‘yule’ soon see, all of those in the video are using sign language rather than singing along to the words.

James says his daughter has been signing from an early age and came up with the idea for the Christmas video two weeks ago raise funds for the Royal Brompton hospital in London.

The resourceful 14-year-old sent tuition videos to all her father’s colleagues teaching how to sign the lines of the song allotted to them. These were then filmed and stitched together into a video.

“The story behind all this is the debt of gratitude we owe the Royal Brompton hospital as they basically saved my daughter,” says James (pictured).

“From surgery at new born through to a full heart repair they have been and continue to be an amazing support to us.

“Over the years we have done various fundraisers but usually each year our staff donate presents to the children’s ward.

“Given this year’s circumstances it was time to come up with something different – the response so far has been truly amazing and within 24 hours we have already received donations totalling £900.”