Yo! New rentals scheme lets tenants move in within 48 hours

Company who launched Yo! Sushi is to launch new, built-to-rent homes to revolutionise the rental process. 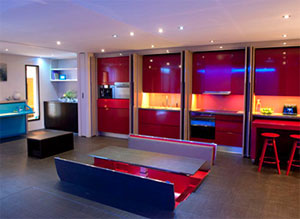 A new option for people wanting to rent a home is to be launched by the co-founder of Yotel.

Gerard Green’s private rental site called Society will provide new apartments that treat tenants more like hotel guests, with an app that speeds up the whole rental process, allowing new tenants to move into a new home within 48 hours.

That’s an unusually speedy process, but Gerard says the lettings business needs to catch up with others sectors that have experienced a digital revolution.

“To find an apartment there is a lengthy process where you have to send your passport and various other forms of ID, pay different fees to different people before you are moved into an apartment block – and then you never hear from them again.”

He plans to build space saving apartment homes with raisable beds, sinkable dining tables and foldaway kitchens. He plans to build the first homes in the New Islington area of Manchester; the application has been refused by Manchester City Council where one councillor apparently called the designs “stupid” adding that it should “yo yo back to London where it belongs,” but it will be discussed again at the September committee meeting.

Jack Spurrier, MD at Yo! Homes said, A lot of issues raised were not to do with planning policy but were personal opinion, however we will be reviewing parts of the scheme and are hopeful that it will be approved at the next meeting on 22nd September.