Designs on Property tracks and summarises the monthly property indices. Kate Faulkner says, “It’s astonishing that we still have five towns – Belfast, Newcastle, Glasgow, Bradford and Liverpool – which have house prices at lower levels than they were 10 years ago.” 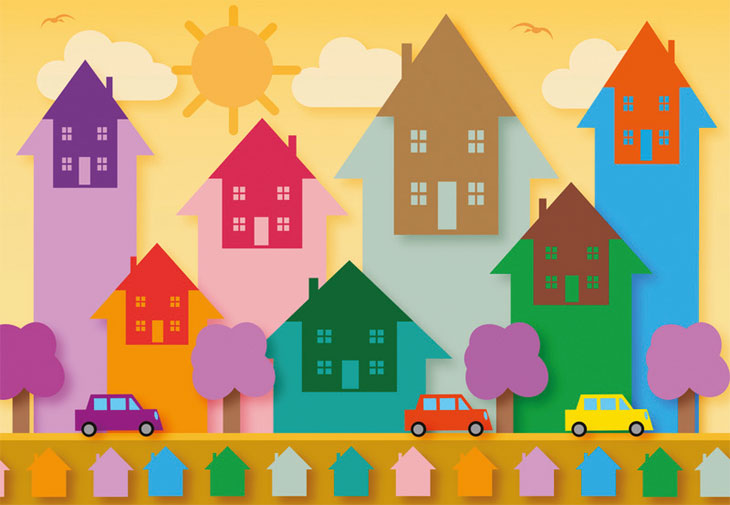 Rightmove: “2018: A tale of different markets leads to Rightmove forecast of +1 per cent.”

naea | propertymark: “Homebuyers bag a bargain as a record number of sales go through at less than asking price.”

Average prices across the indices vary from mortgaged only prices from the Nationwide HPI of £211,156, through to marketing prices (ie not necessarily sold) from Rightmove of £302,865, a 43 per cent difference. Average sold prices from the UK HPI stand at £240,860.

Kate says: In the past, the media would have been going crazy with these headlines, even though they clearly state more of a slowdown rather than a crash. We are now seeing more accurate reporting, partly thanks to better commentary from the industry. This is good news, but we are still not producing good enough data, in my opinion, for the media or for consumers on what’s happening in the local area. For example, I was on BBC Radio Nottingham recently when they were very excited about Nottingham ‘topping the charts’ of price growth. Without commentary about the fact this means that prices are back to where they were 10 years ago, many sellers would have expected a huge increase in value year on year. Yet I showed three examples: properties which had risen by more; ones which hadn’t changed and ones which had fallen.

First establish where the demand is, then chase instructions that fit your buyers’ needs, so that deals are secured.

We have to get the message out at a local level so people understand that, in a typically flat or slow growing market, price growth is different for different areas, property types, and can even change from one month to the next, depending on supply and demand. Case studies of your property sales which have gone well and those that have stalled, and why, would be well worth considering for 2018. Most consumers will be happy to put theirs forward, for either a small fee or a reduction in commission and in my experience, case studies are one of the best ways to market your services.

Kate says: Property price growth is slowing substantially versus previous growth. For example, since 2007, the price growth in England was 24 per cent. This is lower over a 10-year period than the ANNUAL price growth achieved in 2003 alone. With annual house price growth now settling in single figures, way below the annual average since 2000, agents and developers will need to think about how to persuade people it’s still worth the cost of moving.

It also means renting is likely to become more of a sensible financial as well as personal choice. One area to start looking at to see the potential impact is the North East where population growth (ie demand) is fairly flat, prices are nine per cent lower than they were 10 years ago and annual price growth is running at a third of its annual average increase since 2000. Interestingly, despite property being such great value, according to Nationwide figures, the fall in the percentage of first-time buyers from 2006 to 2016 was the second biggest next to London. If this trend spreads, agents are seriously going to struggle to find sellers and buyers in the future, so it’s a problem that needs preventing now, rather than once it’s under way.

RICS: “There were significant variations in price trends at the regional level. Indeed, London continues to return the most negative sentiment and respondents also continue to report downward pressure on house prices across the South East. Alongside this, the price gauge edged further below zero in East Anglia and remained slightly negative in the North East. Elsewhere, results continue to signal further price growth in all other regions/ countries in the UK.”

Nationwide: “All regions except London saw house price gains in 2017. The West Midlands topped the table for the first time ever (on data back to 1974), with average prices up 5.2 per cent year-on-year. London saw a 0.5 per cent annual decline, the first since 2004, ending the year as the weakest performing region. East Anglia, last year’s top performing region, saw the biggest slowdown in annual house price growth, from 10.1 per cent in 2016 to 2.3 per cent in 2017.

Prices in London are c55 per cent above 2007 levels, while North and Yorkshire & Humberside remain lower than their 2007 peaks.”

LSL Acadata HPI: “The South West now leads price growth, overtaking the North West in the last month, with annual growth of 4.3 per cent. The North West and West Midlands, both up 3.4 per cent, continue to prove robust, as does the East Midlands (3.2 per cent) and Wales with 3.3 per cent growth. The slowdown that began in London and spread to the South East may now be affecting the East of England. The region, which, in August led growth in England and Wales, is now in sixth place, with annual growth of 2.8 per cent.”

Hometrack: “Housing market activity across Scotland picked up over 2017, resulting in Glasgow recording the highest rate of house price growth (7.9 per cent), followed by Edinburgh (7.6 per cent). Aberdeen continues to register price falls with average values down -3.7 per cent over the last 12 months.”

Kate says: It’s astonishing that we still have five towns – Belfast, Newcastle, Glasgow, Bradford and Liverpool – which, according to UK HPI figures, have house prices at lower levels than they were 10 years ago. I don’t think I have seen any areas take this long to recover from recession. Comparing this recession’s market recovery with the 1990s recession, I found that it took seven years this time around versus eight in the 1990s for property prices to recover to their previous height in England – and carry on growing, while Wales took 10 years this time versus eight years in the last recession. Regionally, London was super quick, taking just four years versus seven in the 1990s, while most regions took seven to eight years in both recessions, although not all areas had data available. From a town perspective, the main comparison is that some cities/towns – such as Reading, Oxford and Cambridge – took just four to six years to recover from 2007, while areas such as Belfast (Q3); Newcastle upon Tyne; Glasgow; Bradford; Liverpool have yet to recover 10 years on.

Most commentary focuses on property prices, but prices are driven by what happens to supply and demand, which is why performance is so localised.

LSL Acadata HPI: “We estimate the number of housing transactions in November 2017 in England & Wales at 77,500, based on Land Registry numbers and their methodology for accounting for domestic property sales. This is down by 3 per cent on October’s revised total, which is in line with the seasonal decrease of 2.5 per cent in the month of November.”

naea | propertymark: “In November, the proportion of sales made to FTBs rose to 27 per cent, from 22 per cent in October. The number of sales agreed per branch decreased for the first time since July, from eight per branch in October, to seven in November.

Bank of England: “Remortgaging approvals increased to 51,593, the highest since October 2008. House purchase mortgage approvals fell slightly to 64,575 in October.”

RICS: “The trend in new buyer enquiries appeared a little more stable over November. At the same time, newly agreed sales continued to slide at the headline level albeit the pace of decline moderated. However, with the exception of Wales and Northern Ireland, where sales rose quite firmly, transactions were either a flat or negative across most other areas.

“Looking at supply, new instructions to sell continued to deteriorate at the headline level. This extends a run of 22 months in which this series has not seen a positive reading. However, in part driven by the slower pace of sales, stock levels on estate agents’ books held broadly steady at 44.7.”

Kate says: Demand looks like it is slipping along with stock levels so in areas where stock remains tight versus demand, prices may ease, but still see increases. On the other hand, some areas or property types may experience falls where demand slips below supply. In some areas such as Essex, we are finding properties in normally popular areas which have been on the market for several years. Understanding what is required in the future from different types of buyers will be critical to securing deals, rather than simply chasing listings and covering the costs of marketing only to realise there just aren’t buyers around to purchase, subsequently making these a drain on profits. Agents should be establishing where demand is coming from first, then chasing the instructions that fit their needs so deals are secured.