Chancellor extends furlough until the end of October

The Chancellor has announced in the Commons today, the commitment to continue furlough payments – but with strings attached from August.

The Chancellor, Rishi Sunak, has announced that the furlough scheme which pays 80 per cent of the wages of workers for companies affected by the pandemic, has been extended by four months, until the end of October. Commentators expected the Government to reduce the furlough payment to 60 per cent of earnings until September.

In an announcement to the Commons, the Chancellor said a million companies are being helped by the scheme, with 7.5m employees currently furloughed. While pledging eight months of support in total, he said there would be no changes at all until end of July.

He stated, “From August to October the scheme will continue for all sectors and regions of the UK but with great flexibility to support the transition back to work. 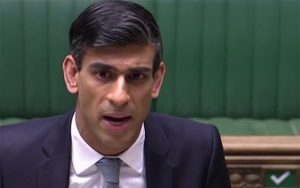 “Employers currently using the scheme will be able to bring furloughed employees back, part time. And we will ask employers to start sharing, with the Government, the cost of paying people’s salaries.”

He went on to say full details will follow at the end of May. He also said that employees will continue to receive the same level of support, up to 80 per cent of salary or £2500 a month, but with the employer sharing the wage bill.

What ‘share’ will be expected of employers from August 1st onwards, has not been announced.