Dawn of a new kind of tenant deposit

Finding a deposit to buy a home is beyond the reach of many young people, but, says Andrea Kirkby, finding a deposit on top of the first month’s rent is also tough for many - something that the new generation of deposit replacement schemes hope to address. 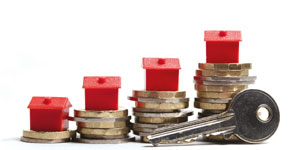 Deposit replacement and tenant passport schemes aren’t new, but they’re gaining traction with agents and landlords. Knight Frank, for instance, has signed up to both Zero Deposit and Housing Hand, while Flatfair is signing partnerships with major institutional landlords as well as agents such as Spicerhaart and Northwood. It’s interesting that while initially, agents piloted these products in a few branches, Zero Deposit says that now, they usually go live across the whole branch network immediately. The market is certainly maturing.

That’s a concern echoed by Steve Harriott of TDS. “The big unknown for all deposit replacement schemes,” he says, “is whether the claims and disputes records will be higher as the tenant does not have a cash deposit at stake; only time will tell whether tenant behaviour is different in these schemes.”

It was hard to persuade anyone to consider the product. Now, it’s easier to convince landlords to switch and everyone wants a deposit alternative. Franz Doerr, Flatfair.

That hasn’t stopped him dipping a toe in the water through a partnership with Zero Deposit. Franz Doerr, co-founder of Flatfair, says it’s interesting how low the company’s claim rates have been so far. “We’ve sold thousands of Flatfair memberships” he says, “and we have only 4-5 cases of deductions.”

Some concern was also expressed over whether deposit replacement schemes were financially strong enough, or well enough regulated, to last the course. 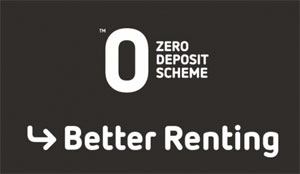 That’s certainly a concern that resonated with Steve Harriott, who points out that one of the reasons TDS decided to partner with Zero Deposit was that “Zero Deposit is a fully FCA regulated company, which gives TDS significant comfort.” The fact that it had also raised significant finance, and signed up large agency partners, also counted in its favour.

Ben Harris of Zero Deposit believes regulation is a huge plus for his scheme. “Large businesses that take compliance seriously have chosen to work with us because we’re regulated,” he says; “it gives the agent assurance that their reputation is protected.” 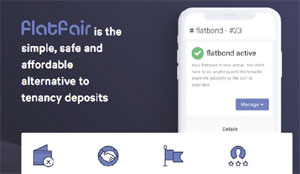 However, not every provider is going for regulated status. Flatfair isn’t regulated, and Franz Doerr says this has advantages for landlords and lettings agents. “It’s not an insurance, so you don’t need to be regulated to sell it. It’s actually considered a payment technology.” But its business is fully underwritten, and it has partnered with HF Resolution, part of MyDeposits, to deliver its adjudication service. “Having it in-house would be difficult,” Doerr says, “as we’d have a conflict of interest.”

While the title “deposit replacement scheme” is rapidly becoming standard, in fact many such schemes try to go further than merely replacing a deposit. For instance, Flatfair provides 12 weeks protection for landlords – more than most deposits – and allows landlords to assign more significant losses, which Flatfair will then endeavour to recover on their behalf. For tenants, not only is Flatfair membership more affordable than a large deposit, but there’s a discount on the next Flatfair membership of up to 25 per cent, if there are no deductions, or if they have paid deductions voluntarily. And the scoring system offers a sort of reference; “an interesting way of creating credibility,” Doerr says. Flatfair can now reference a tenant automatically in just four minutes.

Many deposit replacement products pay a commission to agents. LetAlliance’s Nil Deposit is particularly interesting, since it’s part of a package of products including referencing and inventory that can pay up to £250 of revenue per property. Nil Deposits on its own offers a 20 per cent commission to agents, while Reposit pays five per cent of monthly rent.

There’s another potent benefit for agents and landlords. The availability of a deposit replacement scheme increases the number of tenants who can afford to move into a vacant property. That should increase demand and reduce vacancies. “Void periods are significantly shorter using a deposit replacement scheme,” confirms Rachel Smith of Nil Deposit.

Even the end of tenancies can be speeded up according to Ben Harris; deposit replacement products can deliver faster dispute resolution. The deposit schemes are limited by the timescales laid down in the Housing Act, such as 90 days when dealing with absconding tenants; Zero Deposit can reduce that to 20 days.

Ben Harris points to another agent benefit – an uplift in portal clicks when properties are advertised with deposit replacement. One of Zero Deposit’s agents now gets as many leads a day as it used to per week after introducing the product. “The properties that agents advertise with Zero Deposit are seeing an increase in click through rates on the portal of up to 26 per cent,” he says.

He believes Zero Deposit distribute agents’ workloads more evenly. “Most agents say 75 per cent of their move-ins happen in the last week of the month because tenants wait for pay-day, so they have a huge spike of activity.” On the other hand Zero Deposit sees levels of activity more widely distributed, “so we can even out the work across the month.”

Tenant awareness remains relatively low. There’s been little above the line marketing yet, with most providers marketing through partners, though Flatfair will start a campaign in 2019. On the other hand, when tenants are offered deposit replacement products, take up is high. Though it depends on the agent and the demographic, Ben Harris says it’s around 50 per cent, with some getting 80 per cent.

Agents need to be careful to do their due diligence, though. Some products are simple to use (the best will just plug into the agent’s other systems) but others can be clunky. And Ben Harris advises agents to look at the detail of the contract. For instance, some products require a certain number of inspections; if the lettings agent is a couple of days late on an inspection, or if the tenant fails to renew liability insurance, the cover could lapse.

Now that the market for these products is established, some tenants are on their second time round. Franz Doerr says that while have moved properties within a large landlord’s portfolio, there are some second-time tenants who have moved between different Flatfair landlords without problems. The market is still evolving, it certainly hasn’t knocked the traditional deposit off its perch. Steve Harriott says that, “In terms of the effect of DRI schemes on the performance of government-backed deposit protection schemes, we’ve not yet seen a major impact.” TDS’s latest annual review showed an increase of nearly seven per cent in deposits protected, and there’s still demand for traditional deposit protection. However, TDS has chosen to back Zero Deposit to give tenants and landlords more choice.

There’s a fair amount of choice of business model, too, with styles of product available. Housing Hand, for instance, has decided to offer a guarantor product rather than deposit replacement as such; that lets it address a niche market of international tenants, particularly students. It’s getting great market share in the student accommodation sector. There are also insurance backed deposits like Zero Deposit, and membership schemes like Flatfair.

Some early movers appear to be taking a breather. Dlighted, one of the earliest schemes, had to stop taking on new business in February 2018 as Alan Boswell Group withdrew its appointed provider status. Reposit, another first mover, also had downtime as the market became more competitive; though it got another £500,000 funding in July, its CEO stepped down a month later. Meanwhile Canopy appears to be focusing more on referencing and rental passports. Franz Doerr says, “Dlighted and Reposit were there early but aren’t really dominating the sector anymore; they don’t have the distribution.”

Distribution is likely to be the key to the next stage of the market’s development, but different players are signing up different types of partners. Canopy, for instance, is now focusing on large employers such as John Lewis, Experian, and PwC, giving employees the chance of a tenant passport. Flatfair has forged strong relationships with major institutional landlords, while Zero Deposit has targeted the high street agents, and Housing Hand has partnered with universities and student accommodation owners.

Certainly this is a market that’s growing. Franz Doerr says that a year ago, it was difficult to persuade landlords and agents to consider the product. Now, “convincing landlords to switch has become much easier, and everyone wants to have a deposit alternative on the shelf.”

Ben Harris isn’t the only one who expects 2019 to be the year the deposit replacement market takes off. It might not yet be clear who’s going to win this race – but it’s certainly time to place your bets.

“Reposit relaunched its offering mid-2018 after taking some downtime to work on the product. The first to launch a deposit alternative, and therefore creating the category, Reposit was in a position to learn from early adopter tenants and is the only player with a large number of successful check-outs.

“The industry is discussing how there is no claims data for this new market but Reposit has a large volume of check-outs due to being first to market. The numbers are very positive, 17 percent of all Reposits have some form of a claim against the tenant, which is less than the 30 percent of seen against the tenancy deposits schemes.

“The average claim against a tenant is around £390 and Reposit has a five percent default rate where the tenant has not reimbursed the landlord via Reposit. In those cases, insurance is there to cover the landlord.It is why we are here ultimately, to provide a claims process that works as promised to the landlord. We have been around longer and know the end-to-end process better. Reposit’s system doesn’t negatively impact tenant behaviour, we have proven it.”  – Jude Greer, Co-Founder and CEO of Reposit