Sign in or Sign up
The essential site for residential agents
Home » News » A question of property: Katie Griffin, President of the NAEA
previous next

A question of property: Katie Griffin, President of the NAEA

We talk about some of the important issues within the industry with Katie Griffin, the President of the National Association of Estate Agents.

Katie Griffin (pictured, right) is the President of the National Association of Estate Agents (NAEA) and only the second woman to have the job in the association’s 50-year history.

Half way through her time leading the NAEA, Nigel Lewis interviews her just after she flew in from a week in Chicago representing the UK.

What were you doing in Chicago?

I was there with NAEA Chairman Mark Hayward as well as two board members – Kirsty Finney and Natasha Rodgers from Belfast (all pictured, below). We spent five days there at the National Association of Realtors’ conference and exhibition, where the NAEA had a stand. It’s fairly intimidating; there are 22,000 delegates at the event; more than the total number of agents in the UK.

It wasn’t. We attended half a dozen meetings every day, looked after the stand and networked hard on behalf of the NAEA – we were there as part of the Global Alliance, which includes agents from 60 countries around the world. These kinds of connections are going to be increasingly important after Brexit.

Did it all go according to plan?

The biggest surprise for me was that I thought we’d go there to pick up some ideas and then take them back to the UK. But whereas the US three or four years ago was ahead of the UK, our ideas and technology have caught them up – and overtaken. There was no talk of proptech or online agents when we were there.

What did they think of Purplebricks? 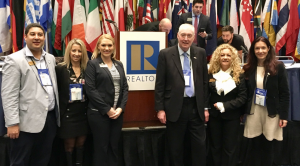 I don’t think they quite understand what’s going to hit them once Purplebricks establishes itself in the US, and we’re going to be receiving two delegations from NAR in March and June next year so I guess they want to come here to see what’s going on.

What do you think of Purplebricks?

I’ve got to be careful here as they are members of the NAEA too – there’s a place for every kind of estate agent within the UK and, as I say to my staff at Sawdye and Harris [her agency in the SW], you’ve got to adapt to new ideas, and that’s what the NAEA is doing too.

There are always going to be customers who don’t want to deal direct with an agent and who are happy to do it at arm’s length online, but there are other who are time poor and want to employ a professional to do it for them.

Have women broken through the glass ceiling in property?

I don’t look at it like that. It’s amazing that there are more and more women working in property, but it doesn’t matter what gender you are – it’s more about how good you are at your job.

What’s more important to me is that we get more young people in the industry, which as a reputation for being a bit old-fashioned. We’re about to launch Trailblazers, which will be an industry-wide apprentice scheme to help fix that. It will enable them to come in at a young age and, rather than doing the filing, study for a proper estate agency qualification from day one.