On The Market battle grows as Action Group is formed 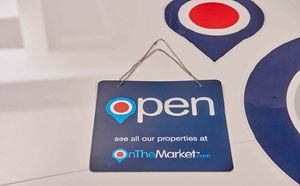 The first meeting of the OnTheMarket (OTM) Action Group, run by Iain White, took place yesterday (Monday 9th May), with attendance from 100 OTM members who have given notice to OTM and received threats of legal action, along with others who would like to leave the portal but have not yet resigned.

The group later issued a statement saying, “The estate agents believe they were misled by Agents Mutual, the owner of the OnTheMarket property portal, over promises made on joining that their subscription fees would always be equal to, or lower than, members who joined at a later date.

It has now been suggested that, instead, Agents Mutual have in fact been offering subscriptions at a much lower price, disadvantaging earlier members.

Iain White (left), consultant to the estate agency industry who organised the meeting, said, “More than 200 estate agents representing businesses across the length and breadth of the UK have registered their interest in taking action against Agents Mutual. There are a lot of aggrieved property professionals who consider that they have been unfairly treated by Agents Mutual.

“On Monday morning our information session in Central London was full. The level of outrage among Agents Mutual members who attended is significant. It’s understandable that these small business owners wish to protect their interests. Now is the time for Agents Mutual to provide urgent clarity on what pricing offers it has made to attract new customers since it launched.

“Affected firms are potentially out of pocket and have a portal which is not meeting their requirements, let alone achieving the success and volume of enquiries that they were promised in return for their early financial commitment.”

A Steering Committee has been formed to manage the process on behalf of Action Group members.

Businesses affected by these issues are invited to register for more information about a potential group action by 16 May. They can do so by contacting [email protected]

Tollers LLP has offered to represent the group together with barrister Ian Rees Phillips.

On The Market comes out fighting

However, member agents who back OnTheMarket.com have written to the portal’s management team to pledge their unwavering support.

OTM, which also reported their latest membership figure of 7000 across the UK, says that many agents see the launch of an action group as a concerted attack from detractors who feel threatened by the continued growth of the portal, and that the messages all convey strong support for the portal and strong conviction that it will succeed.

The agents say that despite the predictable ferocity and noise level from some very familiar detractors, they remain fully committed to the long-term goal of creating the best UK property portal for agents, for their clients and for the property-seeking public.

Ian Springett (right), Chief Executive of OnTheMarket.com, said, “We’ve said it before and we’ll say it again, OnTheMarket.com is here to stay and we know that our achievements to date, our continuing recent growth and the drive to succeed we share with our members are posing an unwelcome threat to some detractors who would benefit from our demise.

“If we didn’t pose a threat to them, they wouldn’t waste their time on us.”

Nick Manson, Director, Mansons, in Jesmond, Newcastle, said, “The recent noise and scaremongering will only make OnTheMarket.com stronger. I believe the recent negative comments are a result of those trying to undermine the incredible amount OnTheMarket has achieved since launch.

“We are receiving an increasing volume of traffic and quality leads from OnTheMarket and I remain a strong supporter.”

Steve Moir, Director and Chairman, Property Sharing Experts, 80 offices in the south west and London, said, “We remain amazed at the short sighted view some agents and some quarters seem to take and firmly believe it is in the long term interest for agents to continue to support OnTheMarket.”

Michael Comyn, Director, Comyn & James, independent estate agency in Pulborough, West Sussex, said, “We are continuing to receive a good volume of traffic from OnTheMarket and as an independent business, we have no time to worry about what other agents are up to, be it good, bad or indifferent.”

A spokesperson for OnTheMarket.com said, “While we by no means take it lightly that some agents are ‘disgruntled’, the broader context is that the apparent supporters of Mr. White’s ‘Action Group’ represents between one and three per cent of our agent firms. The overwhelming majority of member agents remain wholly supportive of OnTheMarket.com and of our shared long-term commitment to build the best portal for consumers and agents alike.

“Regarding allegations that some agents are considering legal action against OnTheMarket.com for alleged misrepresentations made in relation to pricing policy, we have no reason to believe that there are any grounds for legal action. The Board and management team of Agents’ Mutual have at every stage of the company’s inception and development taken suitable legal advice. We continue to take appropriate legal action to ensure that agents meet their contractual obligations.”