Designs on Property tracks and summarises the property indices to June 2018. Kate Faulkner says, “Many agents will have a tricky task over the coming months to encourage sellers to put their properties on the market for the right price, rather than what they think their property should achieve.” 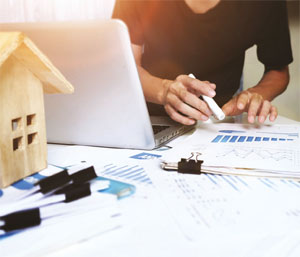 Average prices across the indices vary from mortgaged-only prices from the Nationwide HPI (Jul 18) of £217,010, through to marketing prices (ie not necessarily sold) from Rightmove (Jul 18) of £309,191 and actual prices from LSL Acadata HPI of £303,960 (Jun 18). Average sold prices from the UK HPI stand at £226,351 (May 18). This means the average asking price from Rightmove is 36 per cent higher than the average sold price from UK HPI.

Kate says: Probably the most significant information from the national reports this month comes from Rightmove, which suggests 8.6 per cent more properties are coming onto the market this month while buyer numbers haven’t increased. This means a much needed improvement in agent stock levels – back now to the highest level seen since September 2015. Overall this seems to be resulting in stagnating prices, although this is the national picture, which always comes with the health warning of ‘regional differences apply’! Indeed, Rightmove suggests “a third of properties currently on the market have been reduced at least once since they first came on the market”. This is the highest level since 2011, a time when property prices were recorded as flat as a pancake.

One third of homes for sale have been reduced at least once since listing. That’s the highest level since 2011 when prices were as flat as a pancake.

Kate says: Northern Ireland and Scotland continue to beat Wales and English house price growth year on year, while not really seeing much recovery over the last decade. And with a 2.9 per cent increase in England being made up of a 0.4 per cent fall in London through to a 6.3 per cent increase year on year in East Midlands, the idea that there is ‘one property market’ is proving not just increasingly relevant for property price movements year on year, but also an established historic trend we can see going back as far as 2005. With property prices in each country also growing at 1 to 4.9 per cent we are also seeing a much more long term lower capital growth trend way below the 6-7 per cent seen historically.

RICS: “It is noticeable that with the exception of London, the South East and East Anglia, all other parts of the country are recording results consistent with further (if in most cases modest) house price growth. The Newly Agreed Sales data is displaying a little more monthly volatility at a country/ regional level but the South East is showing the most consistent negative set of results with London not far behind. At the other end of the scale, feedback for Northern Ireland and Scotland suggests these two areas are displaying greater resilience.”

LSL Acadata HPI: “Annual price growth in the capital has started to accelerate over the last month and without London and the South East, growth would have been a little lower – just 2.0 per cent. While Greater London is the only region to have seen growth accelerate, it is far from being the strongest performer.

“The North East continues its strong performance, with prices up 3.7 per cent, led by strong markets in Darlington (up 7.9 per cent annually) and Northumberland (up 8.7 per cent). The West Midlands is also growing well, with prices up 3.2 per cent, and prices in Warwickshire hitting a new peak average and up 5.7 per cent over the year; prices in the West Midlands conurbation are also growing above average, up 5.4 per cent – the strongest growth among the 12 major urban centres in England and Wales, with Leicester, up 4.3 per cent, also growing strongly. It is in Rutland (East Midlands) where annual and monthly growth is strongest, however. Prices there are up 7.0 per cent in May to hit a new peak price, and up 18.5 per cent over the year. However, it did have the lowest number of transactions in the country, which in part accounts for the big swings. Overall, though, the East Midlands was the only region were prices were up in all of its unitary authorities.”

Hometrack: “Manchester is registering the highest annual growth rate (7.4 per cent), followed by Liverpool (7.2 per cent), Birmingham (6.8 per cent) and Leicester (6.5 per cent). House prices are falling in real terms across six cities (growth below the 2.4 per cent rate of consumer price inflation) – Southampton, Oxford, Belfast, London, Cambridge and Aberdeen.”

Kate says: According to the UK HPI, year on year, the biggest fall of the towns we monitor was Reading – showing prices nearly fell by 1 per cent, while being up 40 per cent over the decade. In contrast, Edinburgh saw prices rise by 9.9 per cent, but just up 11 per cent over the decade. It’s a wonder with these changes that we are still reporting year on year and indeed month on month stats so much. Surely what we should be saying is that there are three types of markets currently and then advising sellers or buyers to which market the property they are selling or buying belongs:

LSL Acadata HPI: “In June 2018, we estimate that there were 66,250 transactions – based on Land Registry figures – 2 per cent up on our revised May total. This rise in numbers needs to be set against the seasonal trend of the last twenty years, where a considerably higher 9 per cent increase in sales volumes is the ‘norm’ for this time of year, so on a seasonally-adjusted basis, turnover has declined by some 7 per cent. We estimate that transactions in the first six months of 2018 are 8 per cent below the same period in 2017. Part of this decline in sales, on a seasonal basis, will be due to the weather, not least in February – snow, rain and travel disruption are not conducive to house-hunting. However, part of the decline in sales over recent months has been due to a lack of confidence among buyers.”

NAEA Propertymark: “The proportion of sales made to FTBs rose by five percentage points to 29 per cent in June – the highest amount recorded since February. The number of sales agreed per branch rose from eight in May to nine in June, as buyers push through summer property transactions.”

Bank of England: “In June, the annual growth rate for mortgage lending remained unchanged at 3.2 per cent, and has now been around 3 per cent since late 2016. Although this is above the growth rate between 2009 and 2013, it remains modest compared to the pre-crisis period.”

“There were 31,100 new homemover mortgages completed in the month, some 4.4 per cent more than in the same month a year earlier. The £6.6bn of new lending in the month was 4.8 per cent more year-on-year. The average homemover is 39 and has a gross household income of £55,000.”

Rightmove: “The number of sales being agreed by estate agents is consistent with the same month in 2017 and is holding up well considering the uncertain political background and stretched buyer affordability. In fact, there are signs that activity is improving as the year progresses with sales agreed year-to-date now down just 3.9 per cent, compared to 5.4 per cent that we reported back in May.”

RICS: “The New Instructions net balance has recorded positive numbers for two consecutive months; this is the first time that this has been case since the early part of 2016. However, whether this can be sustained remains to be seen especially as the run rate on new appraisals of property by valuers is still reportedly down on the same period last year for the whole country. A cautious view on activity is also justified by the (twelve-month) Sales Expectations series which saw the net balance slip to zero, the lowest figure since October last year.”

Kate says: Transaction wise, I think we are now seeing the ‘additional demand’ generated from the lack of buying during the recession pretty much flushed through the market. With a loss of 50 peer cent of buyers during the credit crunch from 2007, in some areas for as long as five years, it’s not a surprise that transactions grew through to 2017 and are now starting to fall back to, perhaps, more ‘normal’ long term levels. The question is over the next 12 months with lower capital growth, lower transaction levels, which agents will survive when the loss of business and tenant fees hits? With Countrywide and Foxtons share prices struggling, coupled with more agents ‘going to the wall’ according to some reports, all agents – traditional and online – are going to have to find a way to capture the business that is out there and provide an excellent service to ensure longevity.