Sign in or Sign up
The essential site for residential agents
Home » News » Housing Market » A fifth of buyers have been put off by Brexit worries, says NAEA
previous next
Housing Market

A fifth of buyers have been put off by Brexit worries, says NAEA

The number of house hunters registered with estate agents per branch has dropped by 19% year-on-year, the latest market snapshot reveals.

The number of buyers in the market has fallen by just under a fifth over the past 12 months prompted by people’s worries over the economic uncertainties created by Brexit, NAEA Propertymark has claimed.

Its figures show that 297 house hunters were registered per estate agent during January compared to 367 at the same time last year, a drop of 19%.

“January is usually the time when we’d expect to see house hunters flood the market following the festive lull; however, this didn’t happen last month,” says Mark Hayward, Chief Executive of the NAEA.

“It’s normal that during a period of uncertainty, buyers put their plans on hold, and until there’s further clarity on what Brexit will mean for the market, we expect the level of house buyers to remain stagnant.”

But while the number of homes available for sale per branch remained constant at 36 properties year-on-year, demand from first time buyers ramped up as many took advantage of lower asking prices.

“Although sellers are usually keen to hold off until they secure the ‘right price’, when the market is slow, they are typically more willing to negotiate,” says Hayward (left). “After all, when demand falls, and supply remains the same, it’s a buyers’ market.”

Research by removals service AnyVan.com reveals there may be trouble ahead after Brexit. Its research among 2,000 young wannabe first time buyers shows that 75% believe Brexit and its economic consequences will stall their plans to buy their first home for two years. 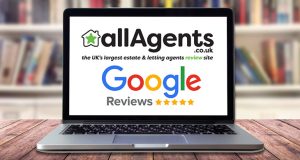 AllAgents hooks up with Google Reviews to offer ‘game changer’