Property selling fastest in Scotland with London losing the race

New data from TwentyCi shows that demand in the property market was in no way dampened by the wettest May on record, but London lags behind.

The latest market activity report from data agency, TwentyCi, has revealed that property is selling fastest in Scotland, where almost half of new property listed sells in under two weeks.

Since the beginning of the year, Scotland has topped with table, with 44 per cent of properties being sold inside a fortnight. Other top performing regions include the South West, Yorkshire and Humber and Wales, with London lagging behind in last place.

Just 22 per cent of properties listed in outer London and around one in ten listed in the capital sold in the same timeframe. 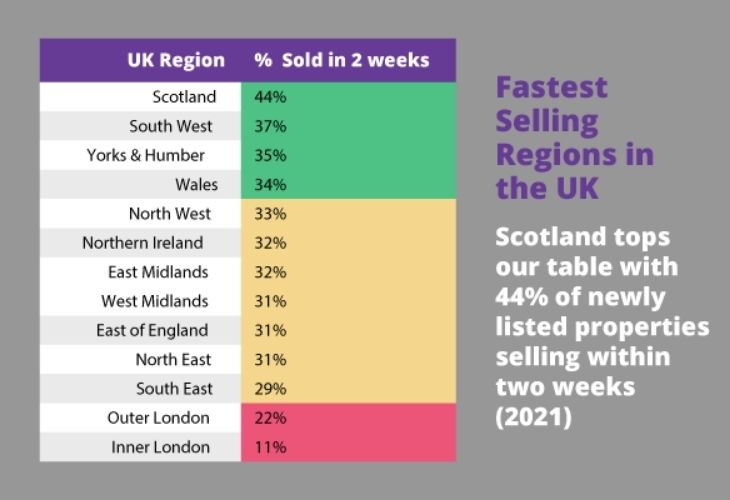 Across the UK, 30 per cent of properties on average are being sold within two weeks of being listed. This is double the amount throughout 2019, the last full year before the pandemic.

Sales up but supply down

The figures also show that while the number of sales agreed were up 29 per cent in May compared to the same period in 2019, supply has fallen. Following a busy March and April, TwentyCi observed 148,000 sales agreed last month but a 10 per cent fall in supply with 146,000 new instructions. 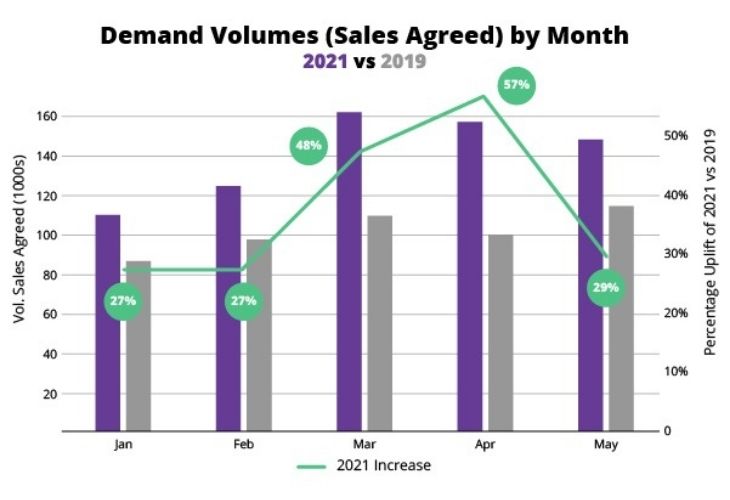 To date, 2021 volumes are down 6 per cent on 2019, but there is still time to catch up, with the stamp duty holiday still encouraging sales activity.

Ian Lancaster, CEO of TwentyCi Group, commented: “2021 has seen record levels of demand that we have not witnessed before and overall, newly listed property is selling fast.

“There is, as we have seen, a small amount of evidence that the market is just starting to cool off, but we should not let this overshadow the news that May was still c.30 per cent ahead of 2019 norms.

“Readers should expect even further asking and selling price rises in the short term, especially in the “hotter” areas where property is selling fast, as the inevitable market correction between supply and demand happens.”