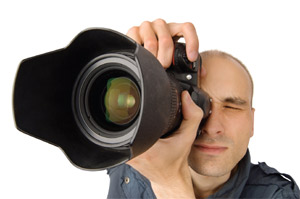 Take a flick through some early 1950s copies of Country Life magazine and you’ll see how far property photography has come over the past 60 years.

The pale black and white photographs of imposing country piles or town houses were taken with the most basic box brownie camera and often excluded pictures of the interiors. The words tended to do the talking.

Today it’s all been turned on its head. Photographs now do most of the initial selling while the words, well, let’s say they’re often mostly window dressing these days.

The portal-driven, ten-to-a-page way of listing properties mean an agent’s photography has to shine as bright as the next listing or be in danger of being lost. And if the photography is really bad, your snaps could end up in the next edition of Andy Donaldson’s Terrible Estate Agent Photos book.

The camera you use, therefore, has to work hard. It must be simple enough for the most ham-fisted and technophobic members of your team whatever the light conditions but look the part in front of fee-paying clients.

Also, it needs to be reasonably portable but also make the pokiest flat, meanest back garden and most bland family home look eye-catching. And it can’t break the bank – particularly as you’ll probably have to buy two in case two properties need to be photographed at the same time.

These recommendations are split into the three main camera categories most agents are likely to use; a digital SLR, (two) compact system cameras and a smartphone conversion kit. I’ve excluded the type of compact, holiday snapper cameras as none of them come with decent wide angled lenses and the images they produce aren’t really at a professional standard. 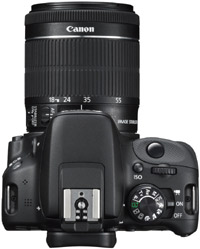 A Digital Single Lens Reflex or DSLR is the large black Olympus, Canon, Sony Nikon and Pentax cameras that you see bird watchers, photography students and press photographers wielding. Digital refers to the fact that the images are captures on a digital sensor, not film, and

single lens explains that the image you see via the viewfinder comes directly from the lens – you see what the camera does. Reflex means that mirror swings down to redirect the image from the viewfinder onto the image sensor when you press the shutter. Verdict: This is a digital single lens reflect (DSLR) camera, but it’s been shrunk by 25 per cent in weight and size compared to its larger stablemates. Reviewers love it because it delivers most of the quality and technology punch of the Canon EOS 700D, which costs a lot more.

One pain point is that, like most DSLRs, the 100D comes as standard with an 18mm to 55mm lens. But that won’t cut it when you’re taking internal pictures – the wide angle won’t be wide enough.

One solution is to buy just the body (about £275 on Amazon) and then buy a Canon EFS 10-18mm wide angle zoom lens to go with it (£200). On the 10mm setting even small rooms will appear airier while the 18mm setting will make exteriors a little fatter and juicier compared to say a 36mm lens. Or if you want to push the boat out, Canon offer an EOS 100D package with a body, 10mm to 18mm lens and 18mm to 55mm lens all for £530.

It’s described as a ‘beginner’s SLR’ so won’t baffle novice photographers in your team. Other bonuses are its 18-megapixel sensor capacity, touchscreen at the back and easy-to-use scene choice settings – useful if you’re flitting from room to room, each with different light levels.

The Lumix GF-7 is a compact camera alternative to the Canon EOS/100D. The comparables are that, like a DSLR, the GF-7’s lenses are interchangeable and it features a 16-megapixel sensor – only two megapixels less than it’s much larger and sophisticated counterpart. Panasonic says the camera is designed to operate in low light situations, something agents are used to, and offers a panorama facility; useful if a property offers great views over countryside.

What’s really good about the Lumix GF-7 is that it’s available in a wide angle lens version, the G VARIO 12mm-32mm. The will enable agents to take wide angled inside and less fish-eye externals without having to change the lens. Lastly, the camera passes the style test – it features handsome and almost retro looks and is available in black and brown leather bodies. Prices vary, but if you shop around the G VARIO version is available for as little as £280.

This camera is designed to operate in low light situations – and that’s something agents are used to!

These are the same as a DSLR but don’t have a mirror, but like a DSLR you can change the lens. This means they are much smaller and quieter than a DSLR but offer the same punch as one (but don’t look quite as impressive). Also, the image you see in the electronic viewfinder isn’t exactly the picture that the camera takes – but it’s not far off.

Verdict: If you’re after a budget compact camera with a reasonably wide angled lens then have a look at the Sony A5000. As well as being pretty to look at and gorgeous to hold in your hands – clients may well comment on it, so striking is the design. It has a huge 20.1-megapixel sensor that enables professional quality images to be taken despite the camera’s petite frame.

One feature agents might like is that the camera is wireless – so no annoying plugging-in when you get back the office. Images can be downloaded via both WIFI and NFC to either your smartphone or laptop. So for the digitally savvy, images can be downloaded on the road and sent back to the office. Also, the camera can also be controlled using a smartphone; useful if you want to take a wide angle shot from the edge of a room but don’t want to clamber over the client’s furniture, then you can take the pic remotely. 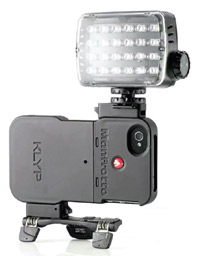 As you’ll know, smartphone cameras are such high quality these days that they’ve almost killed the market for the compact cameras (fixed-lens, smaller cameras) because, while you’re holiday, why carry two around? Pictures taken on the better smartphones like the iPhone 6 or Samsung Galaxy 6 are surprisingly good for the work agents need to do, but lack a wide angle lens. Kits like this one convert the camera’s existing lens into one.

Verdict: If shelling out £300 to £500 for a camera seems like a lot then one less expensive option is to convert your iPhone 6 into a wide-angle camera. There are several manufacturers offering these, many of which look and feel very cheap, but the KYLP+ by Italian company Manfrotto is different.

Although it’s only £45 to buy, it’s both an innovative bit of kit and has some interesting functionality agents may find useful. The kit pack includes a case for your phone and you then screw one of a range of lenses, which includes three wide angle variants from mild to medium to fish eye. The case also enables the phone to be supported by a tripod and a proper flash (rather than the phone’s) and also creates pretty good videos, for the price. There is a downloadable iPhone app available too.

There are two downsides. The first is that you’re relying on the phone’s image quality. And an iPhone offers only 8 megapixels compared to the Lumix GF-7 and EOS/100D’s 16 and 18 espectively. Also, you might not win too many brownie points from clients when you whip out your KYLP+ covered iPhone, as it looks a little ‘Back to the Future.’ 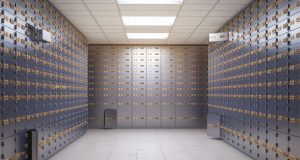