Plan for a new generation of new millennial towns proposed

'Tomorrow's Places' report calls for a 'Department for Growth' to be created to work with the Mayor of London and partner directly with developers. 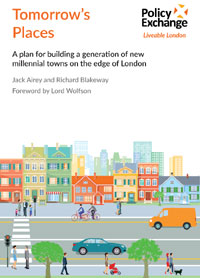 To address the shortage of homes in and around London, says the report, a new government Department for Growth should be created and work with the Mayor of London and partner directly with developers to build 15 new millennial towns – each with 30,000 homes, along major transparent routes out of London, in the capital’s commuter belt.

The new towns should rekindle the “pioneering spirit” of post-war planning, that created new towns such as Crawley, Bracknell and Milton Keynes.

The Lord Wolfson of Aspley Guise, Chief Executive of Next and founder of the Wolfson Prize, said, “Much greater ambition is needed by all levels of government in dealing with the undersupply of homes in London and the South East – and this Policy Exchange report provides a plan for doing that. It builds on the vision and principles the Wolfson Economics Prize promoted in 2014 and outlines a strategy that can be supported by central government and the Mayor of London. Political leaders who want to win the support of young millennial renters should read this report and act on it.”

This report is a must-read for all London agents – and those operating around the Capital!

Foxtons report 60% sales revenue jump as it invest in Boomin