Mio has helped one of Wales' largest agents reduce its average offer-to-exchange period by a third, and is soon to go national.

A ‘game changing’ sales progression tool that links buyers, vendors and agents via a single digital platform and smartphone app is soon to go national after being tested in Cardiff over the past 12 months.

Mio, which stands for ‘move it on’, has been developed by software company tmgroup and has the backing of Connells but has been tested out initially at Welsh firm Peter Alan in and around the city, although some 200 branches in Wales and the SW are said to be now using it.

“I’ve got 29 branches and 11 are on the pilot and the other 18 are waiting to join soon,” says its Managing Director Andrew Barry. “It’s a great USP for our customers and frees up my staff to carry out the other parts of their roles.”

Barry says he’s seen his branches using mio reduce offer-to-exchange from an average of 18 weeks to 12.5 weeks and a sales fall-through rate from the ‘high twenties’ to 21%.

Its collaborative nature has triggered take-up among agents in the city. It is claimed that 50% of the local market are now using it and ‘thousands’ of transactions have been completed using it.

Still in soft-launch phase, the most striking element of mio is that it enables participating agents in a chain to see each other’s sales progression activity, enabling them to solve pinch-points and keep their customers updated.

“I think it will be a game changer as more agents join up but the product is still developing, and we’ve been helping that process during the pilot,” says Andrew Barry. 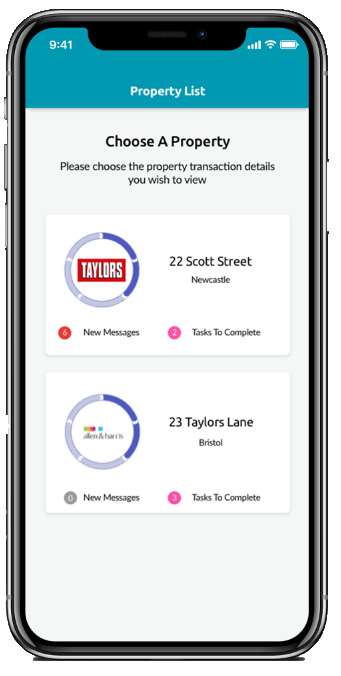 “It’s great that customers know what’s happening when normally it would be very quiet but, more importantly, mio gives them an alert to let them know and event has taken place and that there is something they then need to do or chase up.”

Vendors and buyers are sent in-app messages (see right) and can also see the rest of the chain, although not as comprehensively as agents.

Mio’s Product Director Jon Horton says mio has already spread into neighbouring Bristol and will be offered to agents on a free six-month introductory offer after which they will be charged £90 per branch a month.